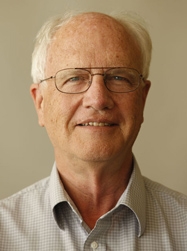 Larry Atkinson, the co-director of Old Dominion University's Climate Change and Sea Level Rise Initiative (CCSLRI), is featured in a new video, "Sea Level Rise: A Slow-Motion Disaster," that was prepared by the Center for American Progress (CAP) and can be found on the organization's website at www.americanprogress.org.

The video includes footage of a tour Atkinson gave a CAP reporter not long after a major rainstorm had caused flooding in low-lying portions of Norfolk. "What once was occasional flooding has now become routine" because of climate change and sea level rise, the narrator says about Norfolk. The southeastern Virginia region is identified as one "in particular" that is impacted by rising waters because the situation is aggravated by gradually sinking land.

Atkinson, ODU's Slover Professor of Oceanography, was the founding director of CCSLRI, which was launched at the direction of ODU President John R. Broderick three years ago. Today he is co-director of CCSLRI with Hans-Peter Plag, a senior faculty member in the Department of Ocean, Earth and Atmospheric Sciences.

Also featured in the video are Daun Hester, who represents Norfolk's 89th District in the Virginia House of Delegates; Ron Williams, assistant city manager of Norfolk; and David Titley, the retired rear admiral who formerly was oceanographer of the U.S. Navy. Titley is scheduled to speak at ODU Oct. 30 as part of the President's Lecture Series and the concurrent European-American Conference: Transatlantic Solutions to Sea Level Rise Adaptation that the Access EU program at ODU is organizing. His talk, which is free and open to the public, will begin at 7 p.m. at the Ted Constant Convocation Center.