‘From Counted Out to Counted On’: Special Education Student Pens First-Person Story About Overcoming Obstacles 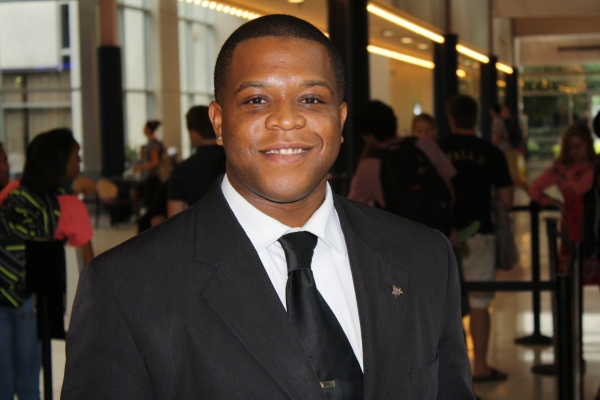 When he joined the U.S. Marine Corps after high school, following his father and grandfather into military service, Hiawatha Clemons III sought to bring his mother's words to life.

As a special education student, Clemons had felt those negative emotions about himself, along with shame, guilt and anger. But he persevered, graduating from high school and serving with distinction with the Marine Corps in Iraq.

When he returned to the United States and came to Old Dominion University, Clemons immediately thought of the young men and women who were like he was a decade ago. He enrolled in the Darden College of Education's human services program, with a goal of becoming a special education teacher or guidance counselor. Now a senior, Clemons carries a 4.0 grade point average in his human services and special education courses.

"I have a dream that, one day, special education will be viewed as regular education," said Clemons, who is from Virginia Beach. The 29-year-old veteran, who does outreach work through the charitable organization The Mission Continues, has written about his trials and triumphs as a special education student in "Stand Up! 75 Young Activists Who Rock the World, and How You Can, Too!" The book, published this month by Publishing Syndicate, includes self-written submissions from 75 young Americans making a difference - in service, achievement and sacrifice.

"I am proud to say that when I graduated from high school, I had only been suspended one time, compared with 10 times I got ... suspension in middle school. I also lettered academically my senior year," Clemons wrote.

The challenges continued for Clemons after joining the Marine Corps. In Iraq in 2005, he was part of a unit of soldiers who narrowly escaped being killed by an IED. After returning home, Clemons said: "I knew I needed help working through what I had done and what I had seen."

He is quick to credit the many supporters and mentors he has had in his life - from his parents, to friends, to instructors at ODU like Ambassador-in-Residence Bismarck Myrick - for helping him readjust to civilian life.

As his military service and academic performance at ODU have demonstrated, it was never about ability for Clemons. It was about self-belief. That's what he hopes to instill in the students he counsels when he is working himself.

"I'm a man that doesn't forget people who were there for me. Ever," Clemons said. "If there's a message I want to pass on, it is that when you don't sell yourself short, you never know what you're capable of."

"Stand Up!" will be released nationwide Tuesday, Sept. 17.