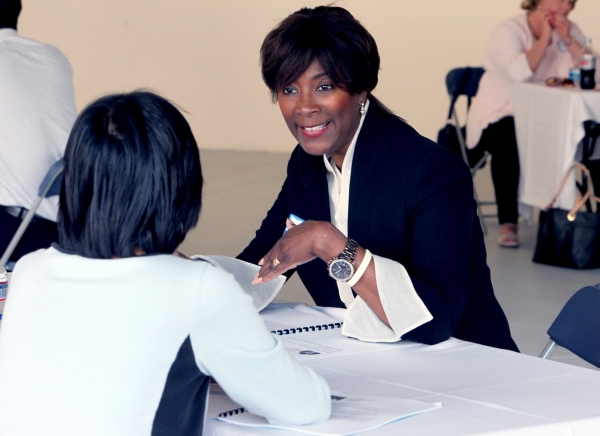 Beverly Roberts-Atwater, a doctor of osteopathic medicine and assistant professor in the Department of Physical Medicine andRehabilitation at EVMS, talks to Jing He, ODU associate professor of computer science, at the Aug. 7 speed networking event. 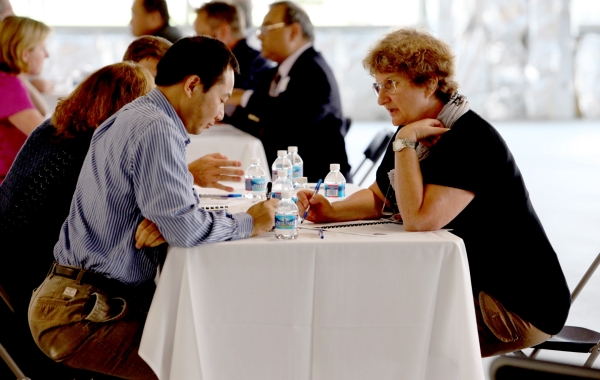 It's a proven model in the dating world, so why not apply it to the realm of research?

Old Dominion's Office of Research held its second "speed networking" event Aug. 7, at which faculty members were invited to meet and talk one-on-one with colleagues from Eastern Virginia Medical School. The one "rule" for the session, whose purpose was to facilitate the exploration of collaborative research, was that each conversation had to occur within a 7-minute time frame.

Karen Eck, ODU director of research development, had read about another university's speed networking event and decided to give it a try at ODU. The first one, held in April, featured faculty members from the College of Health Sciences. Faculty members from the other five colleges with an interest in exploring research collaborations with their COHS colleagues were invited to attend.

Similar to the protocol at a speed dating event, where singles meet and exchange information with multiple potential partners, the visiting EVMS researchers were able to meet and talk briefly with several ODU researchers over the course of a two-hour period. The session was held at the university's Innovation Research Park II.

Lisa Alloway Kelch, research development and outreach coordinator for ODU's Office of Research, planned the speed networking event with Eck and their counterparts at EVMS. Kelch also served as moderator. At 7-minute intervals, she blew a whistle to signal that it was time for the EVMS visitors to move to the next table.

"We had a tremendous response from our side," Kelch noted. "Once I sent the email for RSVPs, our slots were filled the same day."

"I was happy to participate in the speed networking event between ODU and EVMS faculty," said Dayle Daines, ODU assistant professor of biological sciences. "As a microbiologist interested in host-pathogen interactions as well as high-throughput screening, I made some valuable contacts and expect that productive research projects will soon follow with at least one EVMS faculty member. The function highlighted the wealth of expertise and knowledge offered by my ODU and EVMS colleagues, and I highly recommend it to anyone interested in collaborative research."

Christian Zemlin, an ODU assistant professor of electrical and computer engineering whose research is in imaging cardiac activity and cardiac arrhythmia mechanisms, said he also enjoyed the speed networking session and reported having a number of interesting conversations. "While I did not directly find a partner for collaboration, Dr. Nadler from EVMS made me aware of two cardiologists that are very interesting for me - Drs. Bhasin and Ibata," he said.

Participating faculty filled out a three-question profile, which was distributed prior to the gathering and available at each of the tables during the event. The questions asked were: What is your main research/collaboration interest? What expertise are you looking for in a research partner? What can you offer a research partner?

Kelch said that both the April and August networking sessions were well received. "Faculty really like the speed networking idea. It's a fast and efficient way to meet others that might be potential collaborators for research and scholarship.

"The 5-7-minute conversations are an easy way to get to know many people in a short amount of time. I think almost everyone stayed after the ODU/EVMS event for the reception, so that's a good sign that they enjoyed themselves and wanted to continue some conversations. We hope that our faculty made at least one connection that proves useful for a future collaboration, and will share with their colleagues the research interests of those they met so that others might be able to benefit, as well," she said.

Kelch added that the findings from a follow-up survey of participants at the initial event were encouraging. "Most of those who answered our survey after the April event said they made at least one contact."

Based on the positive response, Kelch said the Office of Research plans to sponsor a third speed networking event, possibly sometime during the fall semester.