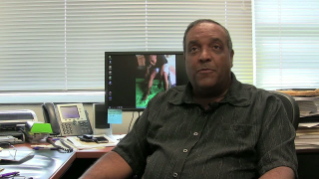 As people across the nation observe the 50th anniversary of the "March on Washington for Jobs and Freedom" this week, one Old Dominion University administrator shared her personal recollections as a young civil rights activist who attended the watershed event that featured Dr. Martin Luther King Jr.'s famous "I Have a Dream" speech.

In 1963, Cecelia Tucker, ODU's director of community relations, was a young teacher at Booker T. Washington High School, in Norfolk, when she joined an estimated 250,000 people that converged on the nation's capital to rally for better jobs and living conditions for African Americans.

Among a litany of speakers that hot summer day was a young Martin Luther King Jr., who scuttled his prepared remarks and delivered a sermon so powerful it became seared into the collective consciousness of millions of Americans and has served as inspiration, to this day, for people around the world.

"I say to you today, my friends, though, even though we face the difficulties of today and tomorrow, I still have a dream," King famously remarked from the steps of the Lincoln Memorial to the massive crowd that ringed the Washington Monument's reflecting pool. "It is a dream deeply rooted in the American dream. I have a dream that one day this nation will rise up, live out the true meaning of its creed: 'We hold these truths to be self-evident, that all men are created equal.'"

For 50 years now, those words have not only held a prominent place in the historical record of the civil rights movement, but also have become part of the very cultural fabric of the United States itself.

Tucker, who grew up in central Virginia during segregation, knows well the indignities and abuse African Americans faced during that period. As a result she would later, as a young woman, participate in some of the protest activities that swept the South as the civil rights movement gained steam.

"When I was in college and involved in sit-ins, people spat on me," she said. "Of course, we had been taught not to retaliate. This was coming from Martin Luther King's philosophy of nonviolence, and if someone strikes you, then you don't strike back. That is very hard. And I can't tell you if I would do that today."

But then came the march that influenced a sea change in how most white Americans regarded African Americans and eventually, in a broader sense, equality in general.

"I became involved in the March on Washington because I wanted to make a statement," Tucker said, during an interview on the Aug. 28 anniversary. "A lot of people went there to be a part of history, or whatever. I went there because I wanted to say to the world, 'You've got to change. We are people, too. We deserve to be treated as first-class citizens.' So we went to Washington to do that. It was a monumental occasion, I can tell you that."

Michael Hucles, an ODU associate professor of history, said the march's 50th anniversary comes at an interesting time because 2013 is also the 150th anniversary of Abraham Lincoln's Emancipation Proclamation, which marked the abolition of slavery.

"Essentially, in putting it all in context ... what happens by 1963 is you have so many things going on: you've got the war in Vietnam; you've got the civil rights movement here; you've got the violence that's growing; the lack of rights on the part of people who want to exercise voting opportunities," Hucles said. "So, I think the frustrations sort of boiled over and peaked and people began to talk about marching on Washington."

Hucles went on to note that King's writings and speeches indicate he felt the movement was not about him, but something "so much bigger and broader."

Even so, King is still widely regarded as a leader whose work is synonymous with the struggle and the cultural shifts that resulted.

The enduring power of that legacy is evident when Tucker gingerly displays her personal Bible, which is now tattered from decades of use. While a college student, she had the opportunity to meet King during a campus visit. He signed her Bible along with his wife, Coretta Scott King, and then-president of Virginia Union University Samuel D. Proctor.

"So, this is a real treasure here," Tucker said.