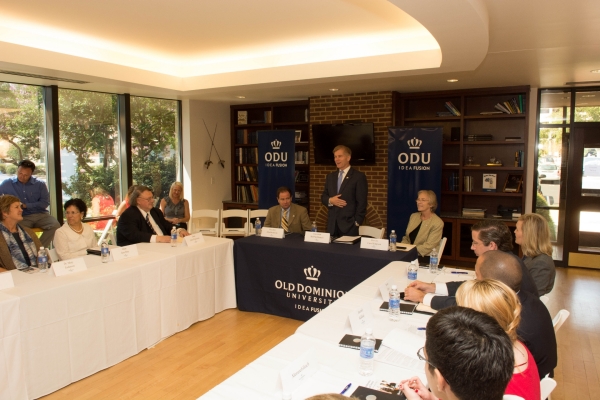 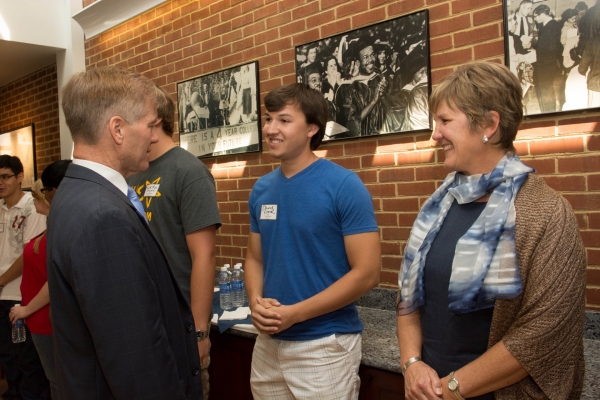 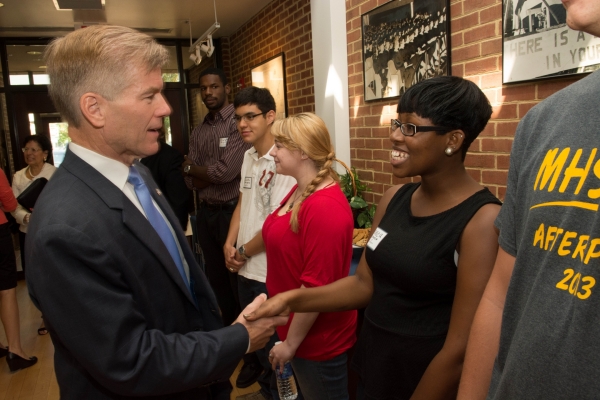 Gov. Bob McDonnell visited Old Dominion University Tuesday to talk about MonarchTeach, a first of its kind program in Virginia that is designed to increase the number of high-quality mathematics and science instructors in middle and high schools.

MonarchTeach, a collaborative effort between ODU's Darden College of Education and College of Sciences, is modeled after the nationally acclaimed UTeach program at the University of Texas at Austin. The program allows mathematics, science and technology majors to receive teaching licensure while earning degrees in their content areas.

The ODU initiative was approved by the 2012 General Assembly along with $700,000 in funding. Tuesday marked the inaugural day of classes in the program, which will graduate its first students in 2017.

In welcoming a small group of MonarchTeach students and faculty who were in attendance, ODU President John R. Broderick quipped: "How many people have the opportunity to actually have the governor sit in on one of their first classes?"

Broderick noted the ODU initiative ties in nicely with McDonnell's desire to bring more young people into STEM-related disciplines and find ways higher education institutions can make that a bigger part of what is being done in Virginia.

"In addition to what we are doing here (with MonarchTeach), we're now third in the commonwealth in terms of producing STEM-related graduates," Broderick said.

McDonnell made the stop at ODU after coming to Norfolk earlier in the day to discuss K-12 education and programs that have been established to address Virginia schools whose performance is not up to par.

"The key to having schools turn around is making sure you've got a world-class teacher that is motivated, passionate and gifted in every classroom," McDonnell said. "That is the key to having a great school. I'm very excited about this initiative, the MonarchTeach program."

This spring, McDonnell announced ODU would be the first postsecondary institution in Virginia to implement the innovative teacher training program as part of his administration's "Opportunity to Learn" education reform agenda and in conjunction with a broader effort to provide high-quality education to all students in the state so they can be prepared for the top jobs of the 21st century.

During his remarks Tuesday, McDonnell cited a "tremendous" statistic provided by College of Sciences Dean Chris D. Platsoucas, who noted that the number of STEM-related degrees awarded by the college over the past five years has gone up 45 percent.

"The reason we've pushed this so much is the number of great new jobs that are going to be available in STEM disciplines is just dramatic," McDonnell said. "Virginia just surpassed California in having the highest number of technology workers per capita in the country."

Due to a heavy presence of defense contractors, federal government agencies and technology-sector businesses in Hampton Roads, McDonnell continued to say: "This is the place that I think will be a hotbed for STEM-related jobs."

ODU Provost Carol Simpson said the university has built the MonarchTeach program from scratch. It may well be the only program of its kind that includes a technology component - a development ODU was well positioned to offer due to an existing focus on modeling and simulation, bioelectrics and alternative energy.

Rich Whittecar, an associate professor of ocean, earth and atmospheric sciences and co-director of MonarchTeach (with Mary Enderson, associate professor of STEM education and professional studies), said the program is already poised to explode in popularity and will need additional funding as it grows and incorporates new staff. Whittecar said the more than 50 students who signed up for the inaugural semester of classes was double the expectation.

Student David Cook transferred to ODU from the Texas UTeach program, where he had taken three related courses. He said he'd always thought about being a teacher but wasn't sure until he participated in an exercise building volcanoes with a third-grade class.

"It was awesome. They loved it," he said. "It's just really cool. It's just amazing to see the kids actually telling you what they learned."

MonarchTeach student Kira Kindley said she wants to teach secondary school students, but was thrown a bit at first by the program that requires student-teachers to initially work in an elementary school setting.

"You have to start with basics and work your way up. Starting at the bottom with elementary school is a very good way to get our feet wet," she said.

Simpson remarked that while MonarchTeach is a stand-alone program, it is also closely linked to ODU's focus on early childhood education.

"It goes back to building from the ground up," she said. "You've got to start with the children when they are very small and build self-confidence."

In closing, McDonnell characterized the inaugural MonarchTeach students as "pioneers."

"You are going to be the real trailblazers. ... I think this is critically important to the future of Virginia - to have passionate, world-class teachers in STEM disciplines," he said. "The sky really is the limit, and statistics have shown in 10 years we are going to have 1 million jobs (in STEM disciplines) that are short of qualified people.

"So, it's got to start with great teachers that are going to get more people involved in these disciplines so America can continue to be a competitive nation," McDonnell continued. "There is so much opportunity."