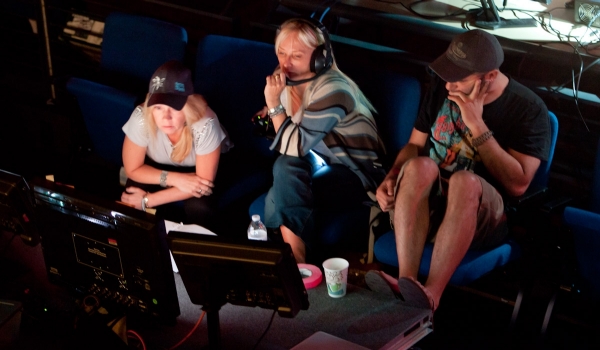 ODU alumni Laurel Harris and Michael Santorelli (middle and right) can be seen at the Goode Theater during filming of a documentary about the band Cracker. 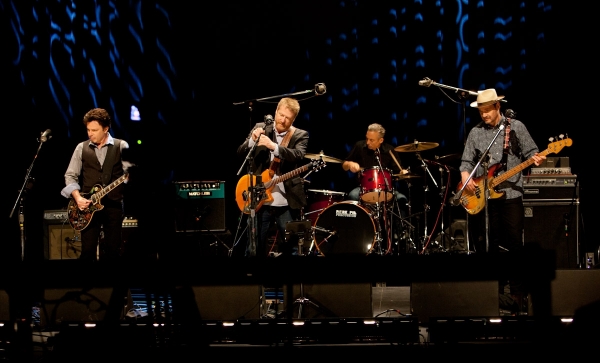 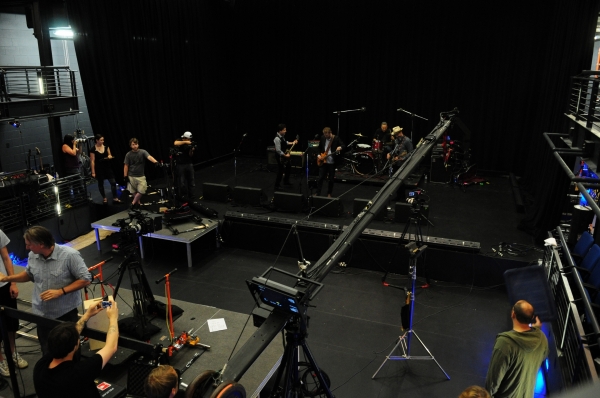 The Stellarhead crew prepares to film a portion of the Cracker documentary "Get Off This" at the Goode Theatre.

A pair of alumni may just put Old Dominion University on the rock 'n' roll map with a feature-length documentary about the band Cracker that was partially filmed at ODU's Goode Theatre.

Laurel Harris and Michael Santorelli, who are 1989 and 1991 ODU communication graduates, respectively, and co-owners of Los Angeles-based production company Stellarhead, recently brought Cracker to their alma mater to film the final scenes of "Get Off This," a documentary exploring the Richmond-based band's storied history. The film, which began production in 2010 and includes tour footage shot across the country, is projected for a 2014 film festival release.

"We are so proud to be back at ODU and have the opportunity to finish up production - it's been a pretty big production," Santorelli said. "We were welcomed with open arms by ODU and everyone that made it happen. The facility is a dream come true and perfect for 'black box' - no audience - intimate performances by Cracker."

"The staff at ODU went above and beyond to help. The students were great and worked long hours. We've been working all over the world for a long time - the guys who ran the facility and the students were top notch," Santorelli said.

Cracker, formed in 1991 by three founders of '80s indie-rock band Camper Van Beethoven, rose to mainstream prominence with its second recording, "Kerosene Hat," and the hit singles "Low" and "Teen Angst (What the World Needs Now)."

Harris grew up in Virginia Beach and said she became a fan of Cracker during its heyday when the band frequently played at Hampton Roads venues. She calls the documentary a "passion project" and a divergence from Stellar Head's typical productions, which consist of films and storytelling videos for brands, politicians and the music/entertainment industry.

She and Santorelli had discussed wanting to film the final scenes in a "black box theater" in New York City about the same time ODU officials notified the couple they wanted to give them Distinguished Alumni Awards. While back on campus to receive the awards last fall, they were given a tour of the Goode Theatre, which did not exist when they attended ODU.

"I thought, 'This is an amazing facility. It's really state of the art. Wow, it would be perfect to shoot our show in,'" Harris said. "I approached the university about whether they would consider letting us do this. They were so hospitable and gracious - Alonzo Brandon (vice president for university advancement), Stephen Pullen (associate professor of communication and theatre arts) and Charles Wilson (dean of the College of Arts and Letters). I think the musicians appreciated it. They were very excited to be playing together in this space."

During a meal break from filming, Lowery said he recalled traveling to Norfolk to play at the now-defunct Kings Head Inn in the 1980s and '90s.

"The first time we toured we came right through the ODU campus; a bunch of college students came over - that was probably 1986 - so this is kind of part of our history," Lowery said, adding of the Goode Theatre: "It's a great facility, fantastic, comfortable. I think the stuff here is as modern as in Los Angeles or New York half the time, so it's cool."

Hickman echoed Lowery's sentiments, saying the band has "so much gratitude to the school for letting us use the facility and do it in a professional way. If we tried to do it in Hollywood, we couldn't, really. It's so generous and we want to thank the school. It's going really well."

Santorelli, who is co-directing the documentary with Harris, noted that it is being produced on a "shoe-string budget." In fact, Stellar Head Productions is using a unique approach to fund the project. In just seven days this spring, the agency raised more than $73,000 through an Internet-based Kickstarter campaign and surpassed its goal by $23,000. The effort was assisted by A-list Hollywood producer Judd Apatow, who helped raise awareness of the project through social media "shout-outs."

"It's an amazing thing for ODU to embrace what this is about and help us achieve our vision for the film," Santorelli said, noting that shooting the Goode Theatre portion of the film alone would have cost tens of thousands of dollars in other markets, such as Los Angeles or New York. "It's a great testament to the school. Twenty years after you graduate and they're still there for you."

To learn more about the project, visit the "Get off This" Kickstarter campaign page or the film's Facebook page.