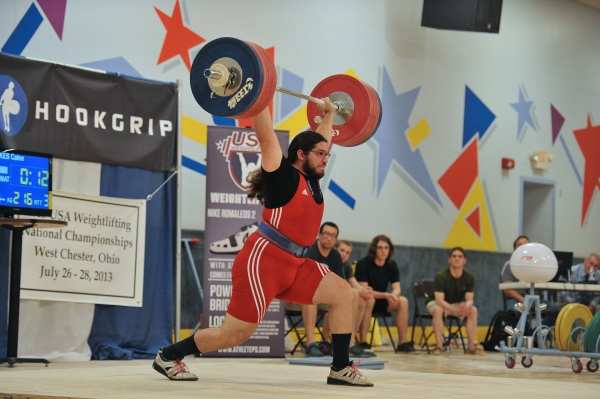 For the most part, press regarding Old Dominion University athletes tends to center around high profile sports like football and basketball. But another ODU student athlete has quietly stepped into the limelight with a recent national championship in weightlifting.

In late July, Caine Wilkes beat nine other contenders in the 105-plus kilogram division to become one of 15 weight-class national champions at the USA Weightlifting national championships in West Chester, Ohio. His best lifts at the competition included 387 pounds (176 kilograms) in the snatch and 475 pounds (216 kilograms) in the clean and jerk, according to a Virginian Pilot article.

At ODU, Wilkes is majoring in Art and English with a minor in art history. While his student status is currently inactive after taking a year off to train for the national championships, Wilkes says he will take the single remaining class he has left next year and plans to graduate at the spring 2014 commencement.

Wilkes said, in an interview, that he hopes to eventually use what he has learned at ODU to follow a career path that combines elements of writing and illustrating.

But, for now, the 26-year-old is concentrating on the upcoming world championships that will be held in Poland in October. After that, Wilkes is eyeing a potential Olympic berth.

"It's just an honor to be on the world team," he said. "Everyone looks at the Olympics. It's definitely a step in the right direction. I'm working toward that; it's the ultimate goal."

Wilkes, who is a co-owner and trainer at CrossFit Chesapeake, said he has been weightlifting since 2000 and competing at the national level for about 10 years.

"I'm very happy about it. It's my first national title," he said. "I've been on the podium a couple times but hadn't made the top spot. It's very rewarding in that sense."

In other weightlifting news, Ben Smith - a recent ODU engineering graduate - from Chesapeake, finished third in the Reebok CrossFit Games in Carson, Calif. Out of 47 competitors, he finished 11th last year, according to the Virginian Pilot article.