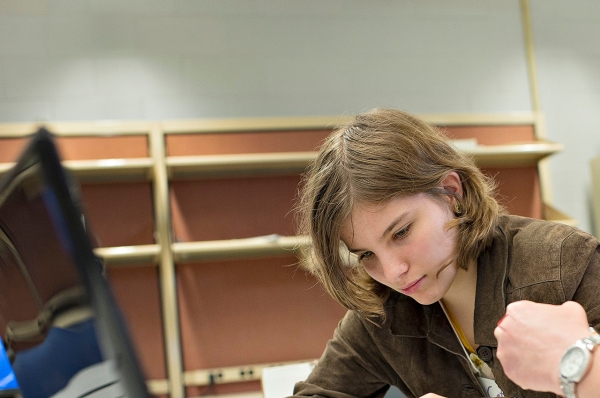 For 12 weeks this spring, middle and high school students with ASD were matched with engineering students at ODU, working together to build robots.

Chung-Hao Chen, assistant professor of electrical and computer engineering in ODU's Frank Batten College of Engineering and Technology, said he learned about the challenges of autistic children during a visit from a former colleague who had a 5-year-old autistic son. "That was my first exposure to ASD. I noticed right away that (the child) wouldn't look at you," Chen said.

Surveying the array of research being done in ASD management and treatment, Chen and Jonna Bobzien, ODU assistant professor of communication disorders and special education, noticed that there was precious little in the area of intervention and treatment for older children.

"For engineers, we are always looking for projects. We came up with an idea of using the building of a robot to help (the students with ASD) develop their social skills," Chen said.

Bobzien had worked previously with Chen on a project in dental hygiene. He approached her with the idea for this latest collaboration to have teens with ASD work on robot construction.

"He was acting straight out of ways to improve the lives of children with autism," Bobzien said. "And this project is perfect. Most of the interventions for ASD are for far younger children. There are far fewer research efforts targeted at teenagers, where interventions could help students with ASD manage the difficult transition to college."

Chen had also been searching for a way to encourage middle and high school kids to pursue careers in science, technology, engineering and math (STEM) fields, and the more he learned about ASD, the more he felt like such a project could accomplish that goal as well.

"Because autistic people are very focused on particular things, they can keep looking and looking for a problem without getting tired," Chen said. "When we design programs, it's tedious work. They seek the detail to fix the problem. They are very focused."

Chen joined forces with Dr. Maria Urbano, who directs the Autism Spectrum Disorders Program for Older Adolescents & Young Adults at EVMS, to devise a 12-week program. High school students with and without the disorder would work alongside college engineering students to build small robots powered by computers.

The goal of the research project was to increase social interaction between the group members. "The part that's helpful about doing something like this is that it helps dissipate some of the social anxiety, so that the focus is on the robot and you interact around the robot," Urbano said. "They have to interact, and the robot forces them to do that."

Teenagers with ASD share a common core social deficit. They have an extremely difficult time initiating and maintaining social relationships because of problems with eye contact, reciprocal social communication and social judgment. Building a robot together over a 12-week period provided the subjects an opportunity to interact socially with the focus of a shared interest.

Psychological testing was done on the students before and after the 12-week program. Throughout the sessions, the group interactions were analyzed on a scale of social responsiveness and interactions, and gauged to see if the subjects' career occupation preferences might shift as a result of being in the group.

Finally, the sessions were recorded, which will allow the researchers to score the interactions using contextual assessment of social skills. Based on the results of the study, the researchers hope to apply for funding for a larger study of hands-on ASD interventions.

The experience was rewarding for the ODU engineering students who participated.

Victor Habgood, a recent graduate in electrical and computer engineering from Oklahoma City, who was just commissioned as a naval officer on the USS Jason Dunham through the Hampton Roads Joint Naval ROTC program, was the leader of the ODU engineering students who worked with the teens with ASD.

"There are challenges to how to deal with the teens," Habgood said. "It was a lot of fun to see them interact and open up to us. At the start, they would just look down at the table. But we got better at teaching them, and it was great to see them respond."

Other students who volunteered for the program were Jeremie Diloy, Lameka Booker, Jeremy Stuart and Christina Williams.