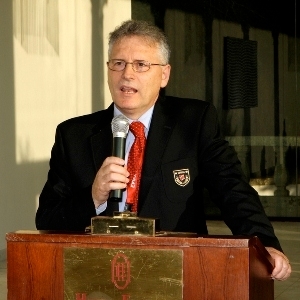 "The thought was that Europe was always the same, it would never change, and that there were other areas where we should focus," said Doukas, Eminent Scholar and W.B. Spong Chair in Finance at Old Dominion University.

Think of everything that has happened in the past 18 years - the spread of capitalist economic policies to the former Eastern Bloc countries, the formation of the European Union, the unveiling of the euro and, more recently, the European debt crisis that has threatened the worldwide economy.

"It has certainly been an interesting time," Doukas said.

Today, EFM (published by Wiley) gets submissions from around the world, providing a forum for both academics and practitioners concerned with the financial management of modern corporations and financial institutions.

Doukas is also sought after in the world community for his scholarship and commentary. He writes several op-eds a year for the London School of Economics. The journal's timing with seismic changes in the European financial landscape has given Doukas a perch from which to observe and comment on the changes that have occurred, and how they affect the global economy.

He believes that sound financial management practices can help Europe rise out of its current debt crisis, which he said started in a completely opposite fashion from the 2007-09 financial crash in the United States.

In this country, rash financial practices by private institutions threatened the economy to the point where massive government intervention was required to keep the system from collapsing.

In Europe, "government-sector spending increased in an out-of-control fashion to support the populist policies of past governments," Doukas said. The cost of borrowing to support these programs plummeted.

"That prompted the banks to invest in these programs run by government, which acted contrary to their interests, and continually grew the size of government," he said. "Eventually, the bill came due, and these banks were exposed to government debt."

A native of Greece, Doukas did his undergraduate studies at the University of Athens (the former Plato Academy) before earning a master's in econometrics and public finance in the United Kingdom. He received a Ph.D. in financial economics from New York University.

Doukas came to ODU in 1991 as chair of the finance department, but after a few years returned to research and writing - his passion - and teaching. He has taught courses on Investments, International Financial Management, Behavioral Finance and Corporate Finance.

The connections Doukas had made throughout his career helped him organize the first European Financial Management Symposium in Virginia Beach in 1994.

"We had started to organize a workshop here for the newly established Ph.D. program. We thought it would be nice for ODU to do something to enhance its visibility," Doukas said. The symposium ended up attracting top scholars in European finance to Hampton Roads, the vast majority from European schools. That led to the journal, the creation of which required Doukas to twist the arms of every financial scholar he could.

"When the journal was launched, they needed two years' worth of scholarly articles before they would agree to publish," he said.

Doukas said the first full meeting of the European Financial Management Association, which took place in the Netherlands in 1994, yielded an incredible haul of quality scholarly work - work that has helped EFM grow in stature with each passing year.

"We're slowly witnessing the decline of the welfare state in Europe, with public-based policies changing to those based on markets. I think business education has had an effect on that, but more needs to be done."

To see links to Doukas' research and writing, and to the EFM journal and EFMA, go to: http://www.efmaefm.org/doukas.shtml.