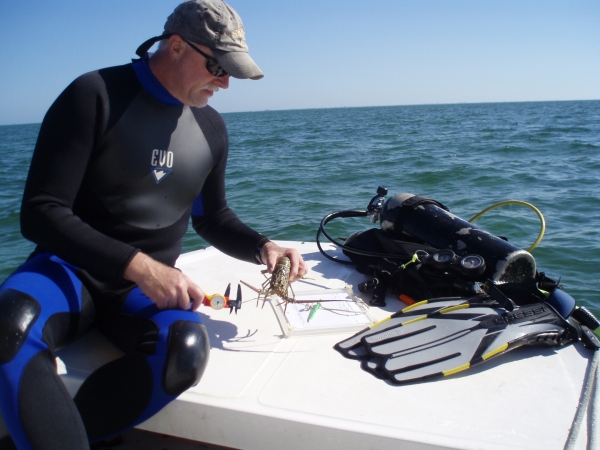 Butler in the Caribbean with a spiny lobster

A team of researchers, including Old Dominion University marine biologist Mark Butler, has concluded that Mother Nature has a complicated - and not very equitable - way of distributing those tasty spiny lobsters that are found in the coastal waters of the Caribbean.

For example, a good number of the larvae produced by adult lobsters spawning off the shores of Venezuela end up growing to harvestable size somewhere else. On the other hand, Florida inherits most of its lobsters from other nations.

Spiny lobster fisheries are worth close to $1 billion to the 30 or so countries of the region, but the larvae of the creatures are so prone to travel during their rather long and footloose development stage that it's no easy task to determine where - or if - they will settle down and develop into adults, Butler said.

That task is exactly what Butler and two colleagues from the University of Miami are tackling, according to their article this month in PLOS ONE, the journal of the Public Library of Science. Their findings could change the ways conservationists and fisheries managers try to protect supplies of the Caribbean spiny lobster and other delicacies from the sea.

The article, "Larval Connectivity and the International Management of Fisheries," argues that fisheries management strategies imposed country-by-country lack the geographic scope to be effective. Furthermore, the researchers identify nursery areas teeming with the larvae in certain open-sea zones, and suggest that these zones need special protection from pollution, such as from ships or coastal runoff.

Butler and the other authors, Andrew Kough and Claire Paris, both from the Rosenstiel School of Marine and Atmospheric Sciences at the University of Miami, have come up with a multifaceted way based upon biophysical modeling techniques to predict the oceanic dispersal of planktonic larvae. Although their study was aimed at spiny lobsters, they believe their findings could influence the overall international management of fisheries.

Oceanic dispersal is an important factor with spiny lobsters because their larvae have an unusually long pelagic (open sea) larval duration. For five to nine months, lobster larvae swim up and down, night and day, in the seas and can be swept far from their country of origin before they make it back to coastal waters to settle.

The researchers use an international trade analogy to explain their findings. "Large disparities between larval imports and exports among countries abound in our simulations," they write. "We identified imbalances in the international exchange of lobster larvae by removing model predictions of domestic connectivity from the total larval supply and then compared the remaining difference in larval subsidies received and subsidies donated to the pan-Caribbean larval pool."

For example, the eastern Bahamas, southern Cuba, Dominican Republic, Nicaragua and Venezuela export far more lobster larvae than they receive from the international community. In contrast, the western Bahamas, Cayman Islands, northern Cuba, Columbia, Florida Keys, Jamaica and Panama receive more larvae from outside their boundaries than they donate to the overall pool.

"The article describes a very sophisticated biophysical modeling project in which, for the first time, we were able to predict the origins and destinations of spiny lobster larvae throughout the Caribbean," Butler said. "This is significant because the Caribbean spiny lobster is the most important fishery in the Caribbean and its larvae disburse for many months in the plankton, thus moving among the 30-plus countries of the region. With this publication, we can now begin working with fishery managers around the Caribbean on Caribbean-wide cooperative management of this important resource."

The researchers propose in their article that Caribbean countries might want to try a compensation plan similar to the "carbon credits" called for in the Kyoto Protocol. "One strategy... would be to assign each nation 'larval credits' based on regional larval export production," they write. "Nations that absorb disproportionally more larvae from the international larval pool bear an ethical responsibility and financial incentive to assist in the preservation of spawning stocks in other areas best suited for exporting larvae.

"Such non-traditional management recommendations are likely to be met with skepticism and their implementation difficult considering the political and economic realities of international agreements and the needs of local communities. Yet scientific evidence suggests that populations of many marine animals persist in an intricate web of metapopulations that are often linked across geopolitical boundaries by larval connectivity and should be managed accordingly."

Open-sea larval nurseries that Butler and his colleagues identified are areas where congregations of larvae seem particularly destined to make it to coastal nurseries, where they can develop into juveniles and then adults. The researchers say the findings seem to be applicable to the larvae of numerous sea species. "Protection of these open ocean larval habitats from potentially deleterious processes (e.g., pollution from oil spills, coastal runoff and vessel discharges) may be considerations for the long-term sustainability of marine species with dispersive larvae," they write.

These open-sea nurseries include relatively large regions offshore of Nicaragua, southern Cuba and the central Bahamas, as well as smaller areas north of Cuba and southeast of Hispaniola.

Butler has longstanding research support from the National Science Foundation and other funding agencies for work that includes tracking the spread of disease among Caribbean spiny lobsters and blue crabs on the United States eastern seaboard. He is a professor and Eminent Scholar of biological sciences at ODU and a past winner of an Outstanding Faculty Award from the State Council of Higher Education for Virginia.

Kough is a doctoral student and Paris is a faculty member at the Biophysical Interactions Lab at the Rosenstiel School of the University of Miami.