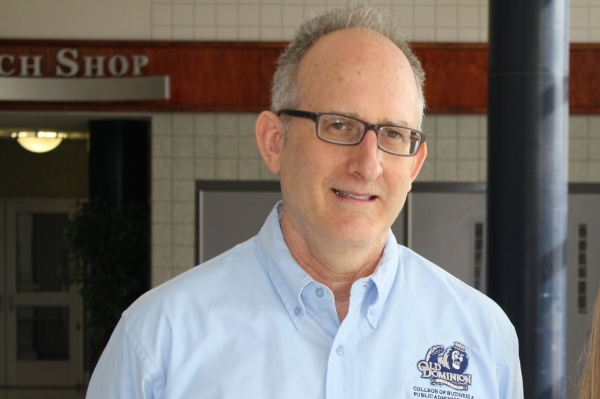 When Diane Horn left her job in Norfolk as an eighth-grade earth science teacher in 1984 to enroll in a Ph.D. program in England, issues such as climate change and the world's rising sea levels were barely being discussed.

In fact, Horn wrote her dissertation on beaches instead of focusing on climatology, because it appeared at the time that coastal erosion was a more relevant topic.

Almost 30 years later, Horn is back in Norfolk, and issues of climate change and sea level rise are very much in the public consciousness. She is a visiting scholar from the University of London's Birkbeck College, working on a study with Michael McShane of Old Dominion University's Climate Change and Sea Level Rise Initiative (CCSLRI).

McShane, associate professor of finance and co-director of the Emergent Risk Initiative at the university, is teaming up with Horn, a professor with the Department of Geography, Environment and Development Studies at Birkbeck College, on research comparing flood insurance systems in the United States and Great Britain.

"Flood insurance is in crisis in both countries," said McShane, who met Horn in 2012 when she came to visit CCSLRI. McShane was instantly intrigued when Horn described her research, which has received support from the Willis Research Network. Based in London and sponsored by Willis, a global insurance broker, WRN is now the world's largest collaboration between public science and the financial sector, with a global membership of nearly 50 research institutions.

As professors of finance and geography, respectively, McShane and Horn work in completely different disciplines. But McShane said the research they will conduct together, using real data from the insurance industry, can inform insurance bodies in both countries about how best to offer flood protection to citizens in low-lying areas such as Hampton Roads without threatening the viability of the entire insurance industry.

Horn said the U.K. faces increasing flood risk, with central London potentially at risk of flooding as sea level rises and the Thames Barrier reaches the end of its design life by 2070. "A destructive flood in central London would come close to testing the capacity of global reinsurance," Horn said.

However, England as a whole hasn't been hit with flooding to the degree that lower-lying regions of the United States have, which has kept in place a system in the U.K. where private insurers offer flood coverage as a standard feature of homeowners' insurance policies.

"June 30 is the deadline that has been imposed to put a proper market in place, with risk-based insurance premiums," Horn said.

Part of the issue stems from the fact that a substantial percentage of homeowners do not buy flood insurance in the U.S., even in flood-prone areas like Hampton Roads. McShane said he and Horn are attempting to determine if the two countries can learn from each other when it comes to effective, efficient flood protection.

"Major themes of the research are to understand how the two countries ended up at the opposite ends of the spectrum when it comes to flood insurance, and what the U.S. can learn from a country that has completely privatized flood insurance," McShane said.

The two researchers also hope this visit is the start of a long-term academic partnership, with future collaborations on issues that affect a large number of both countries' citizens in flood-prone regions.