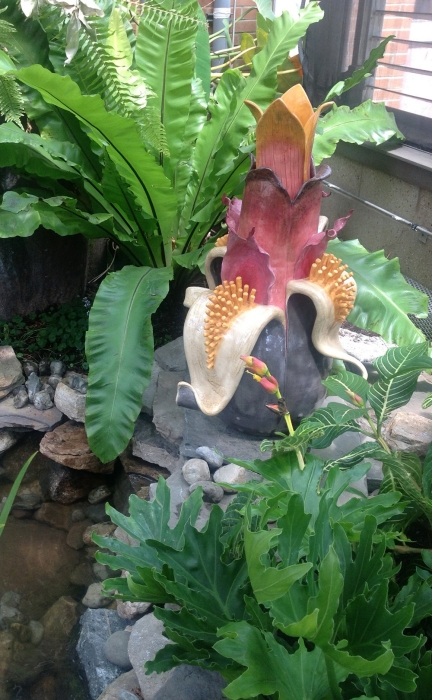 When Timothy J. Motley, the J. Robert Stiffler Distinguished Professor of Botany at Old Dominion University and director of science at the Norfolk Botanical Garden, died of a heart attack March 28 he was planning an unusual sculpture exhibit for the university's Kaplan Orchid Conservatory.

Motley's widow, Tatyana Lobova, a lecturer in ODU's Department of Biological Sciences, said the way the conservatory staff worked to make sure the exhibit could go on is a tribute in itself to her husband, who was the director of the conservatory.

Lobova said her husband was the driving force behind the exhibit of the work of Fredericksburg, Va., artist Christine Lush-Rodriguez.

"The exhibit is dedicated to Dr. Motley and here is why," Lobova explained. "Tim and I met the artist two years ago at the Stockley Garden Art Show (in Norfolk). We both fell in love with her clay sculptures for obvious reasons - they are beautiful, original, yet, very plant- and flower-looking. Christine's inspirations do come from nature - she manages to combine sea creatures with flowers, leaves or plant shapes into something beautiful and organic that just speaks directly to biologists' hearts.

"Tim was thinking about inviting her to exhibit her art in the perfect settings - among plants, like the art exhibits of Dale Chihuly glass sculptures that we saw in many botanical gardens. Tim was thinking about the Norfolk Botanical Garden or the Kaplan Orchid Conservatory as a venue because he was working in both of these places. The orchid conservatory was his final choice, and I can see now that it could not have been a better decision," Lobova said.

"He thought of and planned this exhibit for two years. He brought the artist to the conservatory and discussed the details during her last visit to Norfolk last fall. Trying to combine the artist's schedule with the time when Orchid Conservatory gets the most visitors, he chose the Virginia Historic Garden Week as the dates for the exhibit."(http://www.vagardenweek.org/tours.cfm)

Lobova said that thanks to the "amazing efforts" of conservatory manager Marcus Jones and all the student volunteers he supervises, "the exhibit will take place as Tim planned and envisioned, and it will be an amazing event for ODU and Norfolk."

Lush-Rodriguez, who was born in Norfolk but spent most of her youth in Pennsylvania and New Jersey, has been creating organic sculptures in clay since 1994. "I decided to combine my love for ocean creatures, flowers and plants," she writes on her "Fruitoids" website. The unique sculptures that she creates have a variety of tentacles, seeds, shells, barnacles, petals and coral polyps. Her work being exhibited at the orchid conservatory is for sale.

A memorial service for Motley will be held Friday, May 17, at 3 p.m. in the Rose Garden Hall of Norfolk Botanical Garden.