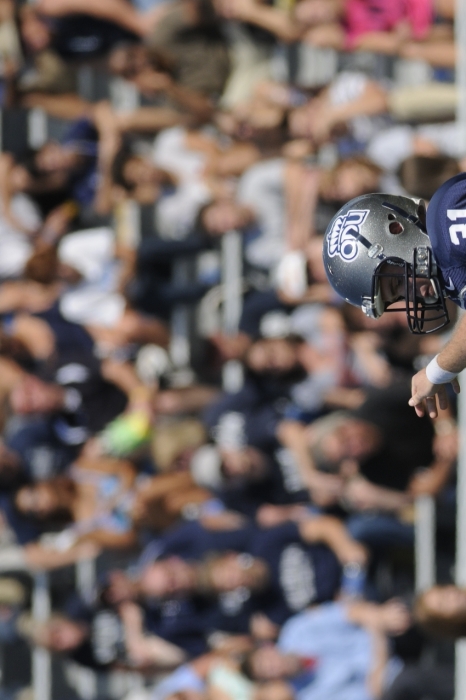 Graduating Old Dominion University student-athletes have made their mark on the field of play during their four years at ODU. Many of them have made an impact far beyond their sport as well.

As a reflection of the well-rounded excellence of student-athletes at the university, three of the six finalists for the Kaufman Prize, the highest honor given to a graduating student at ODU every year, were members of Monarch athletic teams.

Landmark Communications Inc. established the Kaufman Prize to honor Charles L. Kaufman, a philanthropist for whom Kaufman Hall, ODU's engineering building, was named. The prize will be awarded to a graduating senior "who has exerted an exceptional and constructive influence on the university, its students or the community by demonstrating the highest qualities of leadership and service." The Kaufman Prize recipient and runner-up will be announced at ODU's Student Awards Reception and Dinner on Thursday, May 9.

Buchan, from Stirlingshire, Scotland, finished third in scoring for the Lady Monarchs this season at 6.4 points per game. She was a three-time Colonial Athletic Association All-Academic selection. Buchan, who will graduate with a 3.93 grade point average, has been accepted to medical school.

Outstanding both on the field and in the classroom, Plisco racked up a plethora of athletic and academic accolades over his ODU career. The punter, who will graduate as the FCS all-time leader in career punting average at 45.1 yards per kick, earned three All-America honors this past season, including first-team All-CAA honors. For his career, Plisco was named to All-America teams 12 times.

As a senior in 2011, Weidner started all 19 games at midfield for the Lady Monarchs. She scored ODU's first goal of the season and also assisted on goals against N.C. State and Arizona State. She appeared in 76 career games, scoring eight goals and recording eight assists. Weidner earned CoSIDA All-Academic honors as a senior. The nursing major graduated in fall 2012 with a perfect 4.0 grade point average.

The other finalists for the Kaufman Prize are Mariam Abdelhamid, a finance and decision sciences major; LaCheryl Ball, a biology and pre-veterinary studies major; and Samantha Vowell, an exercise science and pre-med major.

Up to 10 students are selected as nominees for the Kaufman Prize. The recipient of the Kaufman Prize will receive $10,000. The runner-up will also receive a monetary award. A screening committee consisting of representatives from the academic colleges and the campus community will review the applications, conduct personal interviews, and forward recommendations to President John R. Broderick for his review and final selection.