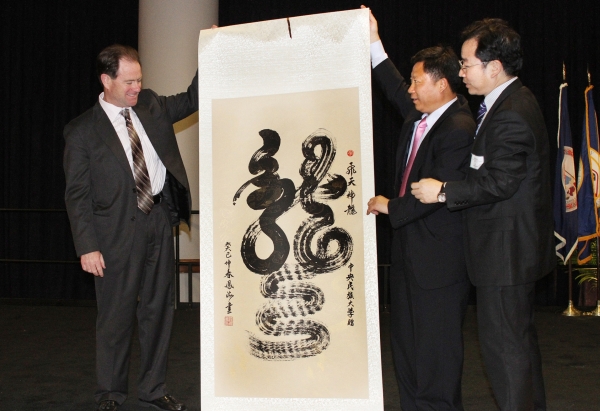 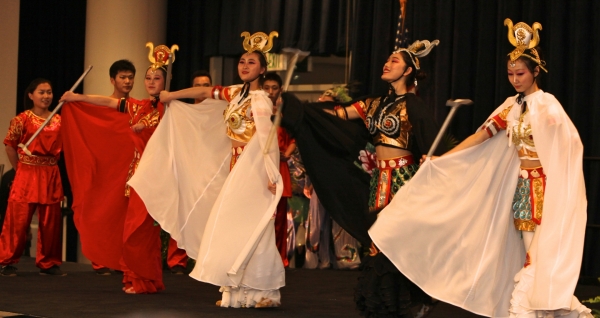 About 300 people attended the Friday, April 19, reception and ceremony at the Ted Constant Convocation Center. During the event, Broderick's remarks were translated into Chinese by Qiu Jin Hailstork, executive director of the Confucius Institute.

Performances included: ribbon dancers from the Tidewater Chinese School; the world premiere of "Fantasy on Chinese Melodies" by ODU music professor and Eminent Scholar Adolphus Hailstork, which was performed by ODU faculty and students from the Governor's School for the Arts; and folk dances and martial arts demonstrations by representatives of Minzu University of China and Capital University of Physical Education and Sports in Beijing, respectively.

In his address to the audience, Broderick noted, with the establishment of a Confucius Institute, ODU joins an elite group of only 70 U.S. institutions that includes Stanford University and the College of William and Mary.

"Those who live in southeastern Virginia are hungry for more know knowledge about the history, culture and the people of China, Broderick said. "Dissemination of new comprehensive and firsthand information is one of the two primary goals of the Confucius Institute program. We are committed to an ambitious, externally focused agenda that will substantially deepen and extend this knowledge not only on this campus but also to our region's citizens. Our excitement about this first program objective is exceeded only by the energy we will exert to bring about the Confucius Institute's second major purpose: to establish more Chinese language instruction in neighboring public school systems and with all interested private schools as well.

"As technology conquers the physical distance that once divided us, conversations will occur face to face. The more we know each other, and about each other, the greater will be our common ground in our understanding," he continued. "Universities are the perfect site for a Confucius Institute. As bridge builders among the nations of the world, we seek to strengthen the bonds of friendship and understanding and to foster appreciation for other cultures. Working toward that end, the hope is we can help build a more peaceful and resilient world. The Confucius Institute is a concrete example of an initiative that will help us all reach these goals. Let us applaud its presence at Old Dominion and what it portends for the future of Hampton Roads."

Fang Maotian told the audience that during his tenure with the Chinese Embassy he has traveled to a number of U.S. institutions through educational exchanges and Confucius Institute activities, but has found ODU to be the "most impressive."

"The China-U.S. relationship has become one of the most important and dynamic bilateral relations in the world. The two countries are working on almost every area, bilaterally, regionally and globally," he said. "I am personally confident that with our joint efforts, China and the United States can embark on a new model of state-to-state relationship that teaches peaceful coexistence and win-win cooperation."

Wenxi said, through an interpreter, that the Confucius Institute would serve as a bridge to improve cross-cultural communications to promote harmony and development in the world.

"As one of the prestigious universities in the U.S., Old Dominion University also bears a high reputation in China," he said. "We admire (President Broderick's) foresight to cooperate with Minzu university of China to establish this Confucius Institute so as to make way for the mutual development and educational internationalization of our two universities."

The Confucius Institute will be housed in Dragas Hall, on ODU's Norfolk campus.

The designation of a Confucius Institute is made by Hanban, Worldwide Headquarters of Confucius Institutes of China. ODU was recognized for its strong affiliations with the regional community, through its China Center and Institute of Asian Studies, in addition to having a strong College of Education program and Chinese language instruction already in place in the College of Arts and Letters.

Confucius Institutes exist for three main purposes: to facilitate the instruction of the Chinese language at the host university and in public and private schools within each institute's geographic area; to impart knowledge of Chinese history, literature, the arts and other aspects of Chinese culture; and to create, through the promotion of language and understanding of China as a country, partnerships that foster mutual understanding between the United States and China.