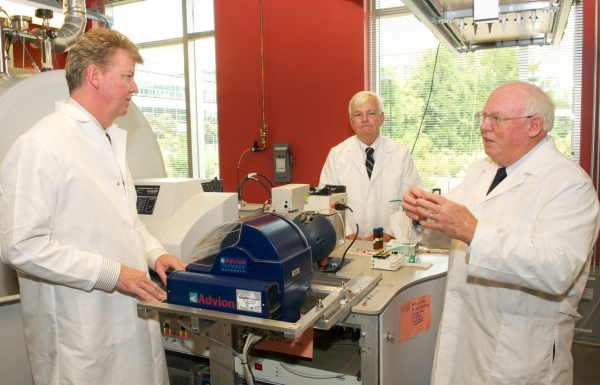 Nutrients PLUS, a company headquartered in Virginia Beach, and Old Dominion University have applied for a patent on recent discoveries they have made related to the use of algae in fertilizer products.

John Moriarty, president of Nutrients PLUS, and Patrick Hatcher, the ODU Batten Chair in Physical Sciences and director of the Virginia Coastal Energy Research Consortium (VCERC), announced the submission of an application April 9 to the U.S. Patent and Trademark Office.

While using algae as a nutrient source in the Nutrients PLUS fertilizer sold under the Clarus brand, the parties made discoveries that improve the plant-growing properties of the fertilizer, as well as make it more environment-friendly, Moriarty said.

"Nutrients PLUS has an advantage over every national brand because no other fertilizers grow plants in this way, while also increasing global sustainability," he added.

That 2012 agreement, which is between the Old Dominion University Research Foundation (ODURF) and NP Labs, the subsidiary of Nutrients PLUS, created a new company called Applied Algae Research Manufacturing and Marketing (AARMM). ODURF also is the university entity that signed the patent application.

Nutrients PLUS began operations more than a decade ago supplying organic-content fertilizers to landscapers, and has since expanded its line to include products for gardeners and farmers. Organic material the company uses in its fertilizers ranges from ground-up chicken feathers to manure. Only recently has the company produced experimental batches containing algae.

Moriarty, who holds degrees in agronomy and forestry, has worked for three decades in industries that promote environmental stewardship. The Nutrients PLUS headquarters in Virginia Beach includes offices and a laboratory staffed by three employees and additional consultants. "This is the nerve center," Moriarty said. "We have contractual relationships with another 300 to 400 people to make the fertilizers."

Representatives of the company became interested several years ago in Hatcher and VCERC's algal research program, which began in 2007. In 2011, at ODU's Algal Farm near Hopewell, Va., the university joined with Nutrients PLUS to oversee a corn crop experiment to test algae-fortified fertilizers.

Rows of corn were grown under test conditions using a variety of fertilizer formulas. "It was a bone fide agricultural trial experiment," Hatcher said. "We grew the corn and then weighed the plants and the roots and the actual corn, and found that a blend of our (dried) algae and commercial fertilizer produced more biomass than commercial fertilizer alone."

Added Moriarty, "Tests taken prior to planting indicated the soil was very unfertile. The results are powerful indicators of algae's effects on stimulating plant growth, with the single variable being the proportion of algae added to conventional fertilizer for enhanced performance compared with standard conventional fertilizer treatments alone."

The one-acre pond at the ODU Algal Farm, the only facility of its kind on the East Coast, is capable of producing about 3,000 pounds of dried algae a year. Moriarty said analysis by his company has shown that surprisingly small amounts of dried algae can have beneficial effects when mixed with larger amounts of commercial fertilizer. "Fertilizer containing organic matter has tremendous benefits over traditional, synthetically made fertilizers," he said. "The plant growth regulators we find in algae are known to be effective at low concentrations and are a real bonus."

Fertilizers that include organic matter such as algae could be formulated with substantially less synthetic nitrogen and phosphorous, Moriarty said. When these nonorganic nutrients are washed off lawns and croplands in coastal Virginia, they have an adverse effect on water quality in rivers and the Chesapeake Bay. Virginia is under a federal consent order currently to reduce nutrient pollution in its tidal tributaries and the bay.

The advantages of fertilizers containing algae "are greater than regular fertilizer alone because the corn plants received an added benefit from micronutrients and plant growth enhancers provided by the algae," Hatcher explained.

Another benefit, Hatcher said, is that this algal-enriched fertilizer reduces the carbon footprint of agriculture. "The benefits are pretty exciting, taking CO2 out of the air to grow algae and then burying it in the soil to create a renewable resource for carbon sequestration," he said. Experts in global climate change estimate that 89 percent of agriculture's potential for mitigating rising CO2 levels comes from carbon sequestration in soil.

"The global agriculture industry is reevaluating its supply chain to lower its impact on the environment. Lowering its carbon footprint makes Dr. Hatcher's work an important contribution," Moriarty said.