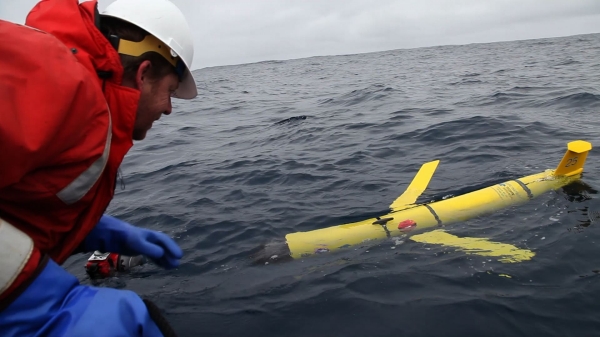 Schofield with a glider

The Old Dominion University Center for Coastal Physical Oceanography Spring Seminar Series will present an expert Monday, March 25, on the innovative underwater gliders that are revolutionizing the collection of ocean data.

Oscar Schofield of Rutgers University will be the guest speaker at 3:30 p.m. in Room 1202 of the E.V. Williams Engineering and Computational Sciences Building. The presentation, which will be proceeded at 3 p.m. by a reception with refreshments, is free and open to the public.

Schofield's topic, "From Hurricanes to Penguins: Dawn in the Age of Robotic Oceanography," reveals some of the advantages researchers gain by using these gliders, which look something like torpedoes. Because the devices are unmanned, relatively inexpensive to make and economical to operate, scientists can send them on harrowing missions, such as into oceans stirred by hurricane winds, or under ice at earth's poles.

These gliders gather data ranging from ocean temperatures and salinity to strength of currents, and they can take these measurements at various depths through the water column. They can travel for thousands of miles in the seas using relatively little electricity from batteries and solar cells, to move, gather data, and transmit data via satellites.

Unlike a submarine or torpedo, an ocean glider does not have a propeller. Instead, the vehicle changes buoyancy with the aid of a small piston driven by onboard battery packs. As the glider slowly rises up and down through the water column, large wings provide forward momentum by "flying" through the water and "riding" ocean currents.

Schofield and Rutgers have managed gliders and their missions for NOAA's Integrated Ocean Observing System.

"My seminar will highlight examples from the West Antarctic Peninsula, along with Hurricanes Irene and Sandy," Schofield said. "I will also discuss the next steps for moving forward, which include development of onboard thinking and behaviors, swarming and coupled machine-to-machine control networks."

Some of the newest gliders are already testing for phytoplankton and are being outfitted with acoustic sensors.

Schofield is a professor at the Institute of Marine and Coastal Science at Rutgers.