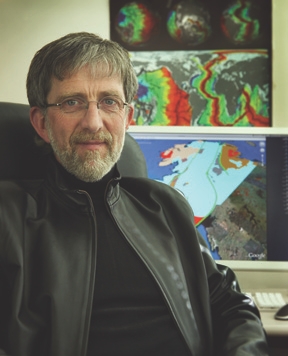 The meteor that is blamed for injuring as many as 1,000 people Thursday in and around the Siberian city of Chelyabinsk was of special interest for more than one reason to Old Dominion University geophysicist Declan De Paor.

Foremost, he is the director of the university's Pretlow Planetarium and has scholarly interest in hunks of rock or metal falling to Earth from outer space.

But he had another reason, as well, to pay close attention to news coverage of this meteor. "This event struck a personal note for me," he explained. "My older son, Gavin De Paor, trained as a ballet dancer in the former Soviet Union Union (see www.pasodos.com/CENTRO/ENG/Resources/De_Paor_Gavin.pdf)
and got his first job in Chelyabinsk. So you can imagine my surprise when I read today's news. This Siberian city was previously known mainly as the site of the worst nuclear accident prior to Chernobyl, which happened in 1957."

De Paor said he checked YouTube for video of the event and, sure enough, was able to post one (http://www.youtube.com/watch?v=e686-i7woR4&feature=youtu.be&t=10s) at 7 a.m. on Friday for students in his astronomy course. This was before he found out that his students had already posted the video at 4 a.m.

Here's an example of what he, as a scientist, could share with his students:

"The fireball was caused by a 10-ton meteor, according to estimates by the Russian Academy of Sciences. The terminology is potentially confusing. We call these objects meteoroids when they are in outer space, meteors as they pass through the atmosphere and meteorites after they impact the surface. They are distinct from 'meteor showers,' which are particles of dust left over from the tails of comets that previously crossed Earth's orbit.

"Meteoroids are either fragments of a planet's crust knocked off during crater-forming impacts, or fragments of the interiors of planetesimals, which are failed planets that were smashed to smithereens by giant impacts early in the history of the solar system. They may be rock or metal, depending on whether they came from the mantle or core of a planetesimal, or they can be so-called chondrites if they came from a planetesimal that never got the chance to differentiate into a core and mantle. However, most burn up on entry and never reach the surface of the Earth."

Based on news reports, De Paor believes the main cause of injury was broken glass from the shock wave that the meteor created ahead of itself as it passed through the atmosphere.

"By coincidence," he added, "an unrelated astronomical event is happening today (Friday), as Near-Earth Asteroid DA14 passes remarkably close to the Earth. It will come well within the orbit of the moon and even within the orbits of geostationary satellites. Were it to hit Earth, the result would be a lot worse than Chelyabinsk. However, it would still probably be less than that in Tunguska, Siberia, site of a major impact event in 1908."

The Associated Press reported that the meteor on Thursday set off sonic booms as it streaked at supersonic speed over Russia's Ural Mountains. It entered Earth's atmosphere at a speed of at least 33,000 miles per hour and shattered 18-32 miles above ground, according to the Russian Academy of Sciences.

However, there were reports of a crater in the ice on nearby Chebarkul Lake, so at least some meteorite pieces may have made it to the ground.

"One thing is certain," De Paor added, "astronomers and geoscientists around the world are breathing a sigh of relief that this did not happen on Dec. 21, 2012, the end of the Mayan Calendar."