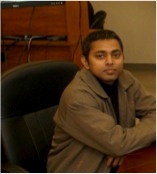 A team of student researchers from the Old Dominion University Vision Lab placed third in a recent worldwide competition on a process of separating brain tumor scans using computer vision, known as segmentation.

The competition, held as part of the Medical Image Computing and Computer Assisted Interventions conference in Nagoya, Japan, pitted 11 teams of student researchers from around the world in the emerging field of multi-parametric brain tumor segmentation (BRATS).

The competition was conducted in three phases. In the first phase, participants were allowed to download the training data for algorithmic tweaking and tuning. Then they evaluated their segmentation performance on the training data, and submitted a short paper describing the results and the segmentation method that was used. Finally, on the day of the challenge, an independent set of test scans was made available and analyzed on the spot by each team, after which the methods were ranked according to their performance.

The challenge results can be seen at http://martinos.org/qtim/miccai2013/results.html, while complete results of all phases can be found at https://vsd.unibe.ch/WebSite/BRATS/Start2013. The research is funded by a National Institutes of Health grant.

Reza's adviser is Khan Iftekharuddin, chair of the Department of Electrical and Computer Engineering and director of the ODU Vision Lab.

Among the new projects being undertaken by Vision Lab researchers are an algorithm to aid in long-distance facial recognition, 3-D face modeling using static image frames and an automatic image stabilizer that uses data points from moving images to create a more visible still image.