ODU Ambassador in Residence Shares His Memories of Nelson Mandela 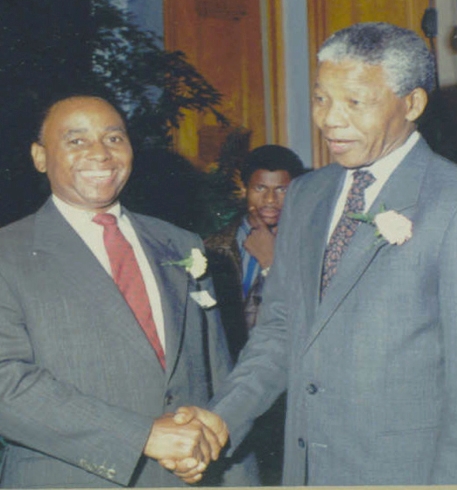 This photo was taken during one of former South African President Nelson Mandela's visits to Durban where Bismarck Myrick served as United States Consul General in the early 1990s.

Old Dominion University Ambassador in Residence Bismarck Myrick arrived in Durban, South Africa, in 1990, a few weeks following the historic release of Nelson Mandela after 27 years of imprisonment for his opposition to the country's race-based apartheid laws.

As consul general, Myrick was the first African American to head the United States' diplomatic mission in Durban.

"The apartheid laws had just been repealed and many South Africans were struggling with the notion of seeing each other as equals across long-standing and legally enforced racial divides. At the same time, deep political changes were taking shape," Myrick said.

It was in this often-tense environment that Myrick gained close-up appreciation for the leadership of Nelson Mandela and many others who guided the profound change that led to Mandela's election as South Africa's first African president in 1994.

By that time, Myrick had been appointed U.S. Consul General in Cape Town, South Africa. He was the most senior American government official to attend the swearing-in of the country's first non-racial parliament in Cape Town. In 1995, President Clinton nominated him to serve as U.S. ambassador to the southern African kingdom of Lesotho, where he continued to observe the evolution of Mandela-led policies in South Africa.

Myrick participated in diplomatic representational events, such as the meeting of southern African heads of state in Maseru, Lesotho. He met Mandela on several occasions, and remembers him as humble, unassuming and courageous. Days after Mandela's death on Dec. 5, Myrick shared his memories of the former South African president.

"Whenever I was fortunate enough to share the same space with Nelson Mandela, close up or even across a large room, there was the unique feeling of being in the presence of greatness - such that we are unlikely to ever experience again," Myrick said.

Living in southern Africa throughout the decade of the 1990s, Myrick witnessed firsthand the profound legal changes that have impacted every aspect of life in South Africa.

"It is clear to me that the reconciliation policies directed by Nelson Mandela are responsible for the development of a peaceful environment for the country. Remember, there were many doubters and those who aimed to undermine the process. The strong, respected personality of Mandela guided the country through some tough challenges that could have derailed a positive way forward," Myrick said. "For example, he intervened and offered workable solutions to disputes, such as which of South Africa's languages should be considered official national languages. His powerful influence was felt in support of peace structures during the 1991-93 violence in KwaZulu-Natal.

"Many in the Western Cape province who had sided with the apartheid National Party began to change their views because of the trust that they developed for the integrity of Nelson Mandela."

He is hopeful that Mandela's influence will long be felt after his death.

"Remarkable for an African leader, he stated that he would serve only one term as president - and kept his promise. Nonetheless, even out of official government office, he continued to give moral leadership to a society still trying to find its way. I am optimistic that, building on his legacy, citizens of South Africa will see that it is in their overall interest to continue building a nonviolent, democratic, economically stable society that respects the rights of all of its people," Myrick said.

Since retiring from the diplomatic service and now serving as ODU's ambassador in residence and lecturer in political science and history, Myrick visits South Africa regularly.