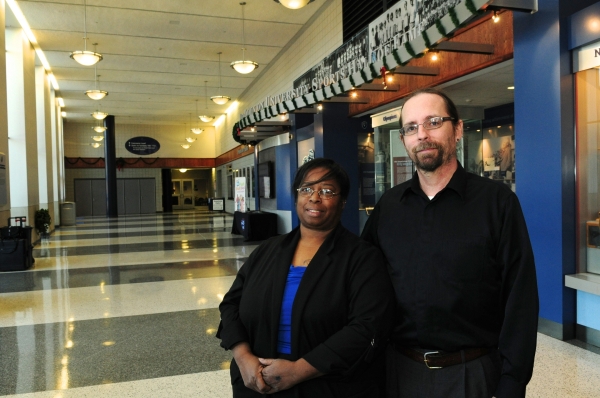 When Vanessa Hodges decided to go back to college after several years working as an LPN, the most excited person in her family was her father.

"He was a truck driver. He never had the chance to go to school, because he had a family to support," Hodges said. "He was always so excited to hear about how I was doing."

Johnnie Benson would have been thrilled to see a picture of his daughter taken on the Great Wall of China, part of a trip Hodges took last year through Old Dominion University's Confucius Institute. And he would have been proud of her participation in the school's Model UN Society, which included a visit to the United Nations headquarters in New York City last spring.

But her father died in 2008, six months after a stroke and heart attack left him incapacitated. The academic journey that Hodges took, starting at Tidewater Community College and on to a bachelor's degree in psychology at ODU, was inspired by her father's memory, Hodges said. "I promised my dad I would continue my education and graduate with honors."

Hodges and her husband of 30 years, Joseph Hodges, who completed his own bachelor's program, in math, this semester, received their degrees at ODU's 119th commencement ceremonies on Saturday, Dec. 14.

Hodges said her husband has overcome his own challenges, and was a rock of stability for her as she made her way through school.

"He was so patient and caring for me through my college career while he was doing his own degree," she said.

Hodges said her husband's devotion shone during the three months of frequent trips to the hospital following her father's stroke and heart attack. "Those were very hard months for me. I attended class in the morning, visited my dad in the afternoon and went to work at 4 p.m. for my nursing shift, getting home around 1 a.m. Days that I worked extra shift, my husband would take up the slack. He cooked meals, did the laundry and visited my dad."

Joseph, who was dealing with his own chronic back pain, was forced to leave his sales job and decided to go back to school as well. He also started at TCC, and worked part time as a math tutor while finishing his degree. Joseph, who will now tutor math full time at TCC, hopes to be a math teacher one day.

Vanessa plans to take more classes to improve her grade point average so that she can apply to graduate schools in psychology.

She said ODU has provided her opportunities she never dreamed were possible.

"I had never been out of the country, even once, and then I was standing on the Great Wall of China," she said. "I have three children and seven grandchildren and, thanks to ODU, I have a college degree. I have so many people to thank. I'm just very grateful."