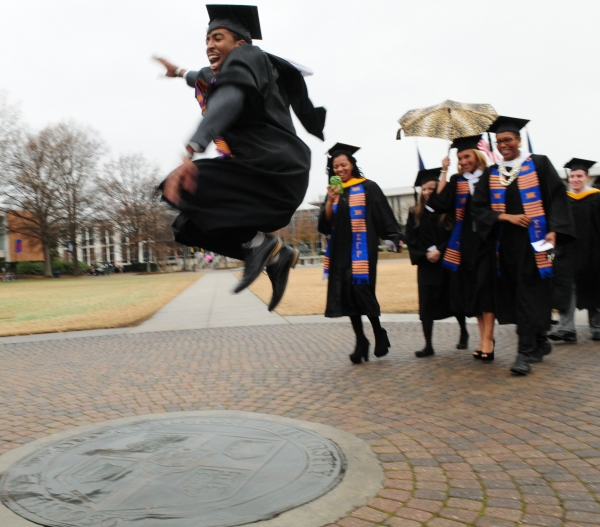 They worked hard for their degrees, so unseasonably cold weather and a bit of rain was no obstacle to more than 1,300 graduates of Old Dominion University, who received bachelor's, master's and doctoral degrees during ODU's 119th commencement exercises on Saturday, Dec. 14.

The graduates were inspired to be active citizens and make the world better for the next generation by commencement speakers U.S. Rep. Scott Rigell of Virginia's 2nd Congressional District and nationally renowned anti-poverty and education reform advocate Geoffrey Canada, during two ceremonies at ODU's Ted Constant Convocation Center.

At the morning ceremony, Rigell told degree recipients from the Frank Batten College of Engineering and Technology, Darden College of Education and College of Sciences to never forget their duty to be engaged citizens.

Rigell, elected to the U.S. House of Representatives in November 2010, told graduates they share both the burden and the joy of citizenship. In a polarized time, with a government that doesn't function as well as it should, Rigell said it's up to individual citizens to bring out the very best in America.

"The burden of citizenship does not pass any single person," he said.

Rigell saluted the tradition of service that traces its roots to the beginning of America, and added that he was especially proud to speak at ODU, home to so many military-affiliated students.

"When George Washington felt the call of duty, he was away from his comfortable home in Mount Vernon for eight years, with only a single week back at home," he said. "We are a free people because so many have given so much."

In closing, Rigell urged graduates to look away once in a while from their phones - "they launched rockets to the moon with less technology than we have in our smartphones" - and engage with other passionate citizens in civil debate, aimed at making the future better for all of us.

"I'm convinced more than ever that we can shape our own future. Reject the seductive call of apathy. Our country is indeed worth fighting for," Rigell said.

At the afternoon ceremony, Canada, president and CEO of Harlem Children's Zone, recounted his lifelong struggle to end childhood poverty during his remarks to graduates of the College of Arts and Letters, College of Health Sciences and College of Business and Public Administration.

Canada said he received his master's of education from Harvard in 1975, a time in America when he said the country had obvious issues to work on.

During his upbringing in Harlem, then the poorest Congressional district in the country, Canada saw children grow up in utterly hopeless poverty. "When I graduated, I made a promise that if God allowed me to get an education, I'd put an end to places in America where people wouldn't be caught dead," he said.

During his elementary and high school years, Canada saw heroes John F. Kennedy, Robert F. Kennedy and Martin Luther King Jr. "sacrifice their lives" for the cause of human rights. "Who could not feel an obligation to continue their work, so their deaths would not be in vain?" Canada said.

In his 30 years with Harlem Children's Zone, Canada has become nationally recognized for his pioneering work helping children and families in Harlem and as a passionate advocate for education reform. In that time, Canada said the cause of human rights has made great progress, "but we haven't kept the promise to eliminate those places where our children don't have a chance."

At the conclusion of his remarks, Canada mentioned that his mother grew up as part of the "Greatest Generation," which endured the Great Depression and won World War II. He said every generation has a challenge to take the mantle of positive change from the generation before.

Canada said in a decade, when he's playing with his grandchildren full time, he will look at his wife, Yvonne, and he'll smile.

"My wife will ask me why I'm smiling, and I'll tell her: 'I look out at these kids, at graduates like these. My promise to my kids will be kept. I know it.'"

Rigell, now in his second term, serves on the House Armed Services Committee and the House Committee on the Budget.

Representing the nation's largest military district, he is working to preserve the region's unique military assets and support U.S. service members, and was instrumental in the successful effort to keep all East Coast aircraft carriers based in Norfolk. He also introduced language improving the maintenance of military housing, later included in the FY2013 National Defense Authorization Act, which President Obama signed into law in early 2013.

Joining Harlem Children's Zone in 1983, Canada became the president and CEO in 1990.

In 1997, HCZ launched the Harlem Children's Zone Project, which targets a specific geographic area in Central Harlem with a comprehensive range of services. The Zone Project today covers 100 blocks and aims to serve more than 10,000 children. The New York Times Magazine called the agency's work "one of the most ambitious social experiments of our time," noting that the Zone Project "combines educational, social and medical services. It starts at birth and follows children to college. The objective is to create a safety net woven so tightly that children in the neighborhood just can't slip through."