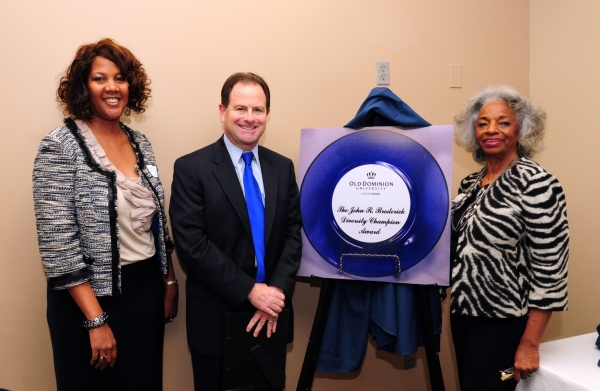 Old Dominion University's Diversity Champion Award, given annually to members of the campus community who embody the school's commitment to diversity and inclusion, is being renamed in honor of ODU President John R. Broderick.

At the Board of Visitors meeting on Thursday, Dec. 5, the annual award was renamed the President John R. Broderick Champion of Diversity Award, as of the 2014-15 academic year. The renaming was decided upon by ODU's Office of Institutional Equity and Diversity after an overwhelming positive response from the campus community to Broderick's actions following a campus incident.

ReNeé Dunman, assistant vice president for equity and diversity, said Broderick wrote a letter to the campus community this fall in which he unequivocally denounced intolerant exchanges on a website.

"Shortly after that letter, the award committee received an influx of nominations of the president unlike any in the history of the program," Dunman said. "As the committee considered his nomination, they agreed it seemed insufficient to simply present an award to an individual who epitomizes its tenets in a significantly tangible way."

On campus, Broderick has been instrumental in the creation of the Committing Our Resources to Excellence through Equity (C.O.R.E.2) initiative, which focuses on maximizing diversity among faculty ranks. Similarly, his Task Force on Inclusive Excellence engages the entire university in becoming a more inclusive community.

He has been supportive of the Women's Caucus and issues of concern to women across campus, such as working to establish lactation rooms, addressing child care concerns and championing efforts to create a better work-life balance.

As a result of some of these efforts, ODU has twice been named by The Chronicle of Higher Education as one of the nation's best universities for which to work.

In the community, Broderick has been honored for his service by the Urban League, Chamber of Commerce and Virginia Center for Inclusive Communities.

"As someone who grew up in an era of exclusion, it is gratifying to have an opportunity to work in a place where inclusion is a priority. Today's recognition shows President Broderick's strong commitment to diversity and inclusion at Old Dominion University and the Hampton Roads community," said Cecelia T. Tucker, assistant to the president for community relations.

"During the last several years of my career as an Old Dominion University professor, I have been very pleased by the efforts of President John Broderick to increase diversity in every sphere of university life," said Tim Seibles, associate professor of English and a national award-winning poet.

"It is all too rare to find someone as busy as he is who is also deeply committed to a better, more culturally inclusive society - on campus and beyond."

Ling Li, professor and E.V. Williams Research Fellow of management at ODU, said Broderick encouraged the school's Asian Caucus to renew its activities and become even more active contributors to the school's growth.

"With his support and encouragement, the Confucius Institute at Old Dominion University was established in April 2013," Li said. "The Confucius Institute has complemented Old Dominion's long-standing focus on international education opportunities. Under President Broderick's leadership, the ODU community is addressing the change of America's socioeconomic framework effectively and is contributing to the economic development of Hampton Roads."

The Diversity Champion Award has been presented at ODU since the 1990s, and Broderick was one of its earliest recipients.

In 2011, the Office of Institutional Equity and Diversity developed a recognition program to honor contributors to equity and diversity more frequently. Ten nominees are selected each semester, and the recipient who exemplifies outstanding contributions is selected to receive the President's Award for Diversity.