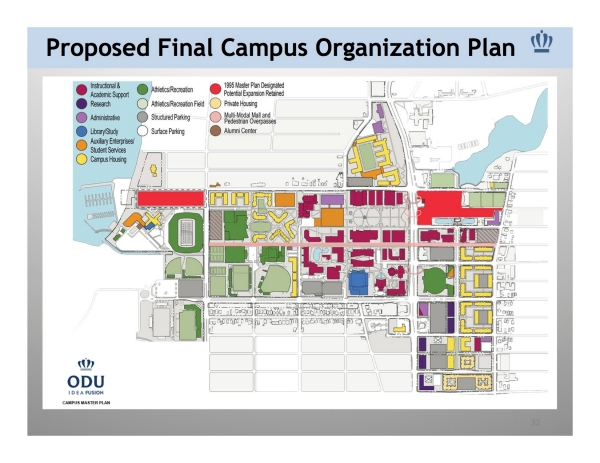 Prior to the vote, board members heard a presentation by Chief Operating Officer David Harnage, architect of the plan, at a special morning session. The overview covered everything from the development and validation process, to feedback from stakeholders, to adjustments to the draft plan.

In his presentation, Harnage highlighted the plan's major accomplishments, noting that it reflects considerable input from individuals and groups both on and off campus, including three area civic leagues. In all, Harnage said he made more than 30 public presentations about the plan.

Since he first presented the proposed plan to the board in the fall, a few adjustments were made, based on feedback collected from the public presentations, which Harnage outlined at the meeting. They include adding a building to address the needs of the College of Arts and Letters, to be located between Constant Hall and Dragas Hall; adding a Health Sciences building to allow for growth in that college; adding an Engineering and Technology building; and moving a proposed new Alumni Center to the planned Conference Center site at the far west end of campus, to enhance services.

Harnage, who has developed master plans at other institutions, said this was "the most complicated plan" he has worked on, due primarily to the constraints of staying within the university's existing boundaries. He noted that he heard positive comments along the way from stakeholders who applauded the university's commitment to "stay within the existing campus footprint."

As for concerns expressed by some area residents regarding the impact of traffic and parking from the proposed football stadium, to be located on the site of the current Powhatan Apartments complex, Harnage said that the streets near the stadium site are public streets governed by the city of Norfolk. But he added that he has told the area civic leagues the university would cooperate if they pursued any parking control program with the city. Harnage also said that representatives from the organizations would be invited to be part of the team that conducts marketing studies in connection with the new stadium, which will look at everything from seating capacity to tailgating to traffic and parking.

"We communicated our willingness to work with them and be considerate of their needs while pursuing the future goals of the institution," he said.

In concluding his remarks to the board, Harnage said: "I believe we have a good master plan."

Vice Rector Barry Kornblau, who presided at the meeting, thanked Harnage for his work on what he termed a "Herculean task," and board members applauded Harnage's efforts.

President John R. Broderick, saying that the plan is "so much more than about a football stadium," pointed out that the plan goes a long way to enhance ODU's needs in making additions and improvements to its academic, residential and student success space.

At the board's afternoon meeting, Broderick said ODU is petitioning Gov. Bob McDonnell to include a provision in his proposed 2014-16 biennial budget for 170 new full-time faculty positions at the university. Broderick said ODU's current student-faculty ratio of 21 to 1 is far behind the 17 to 1 state average. A ratio closer in line with the state average would not only allow ODU to rely less on adjuncts, but also improve student retention and graduation rates. The university has also made the case for new faculty positions with Gov.-elect Terry McAuliffe.

In other action at Thursday's meeting, the Board of Visitors approved:

Granting the title emeritus/emerita to the following faculty members:

The establishment of policy on Award of Academic Credit for Military Education, Training and Experience, effective Dec. 5, 2013. As noted in the rationale statement: "The policy is needed so that Old Dominion University will be in compliance with the Executive Order from the Governor to expand services to meet the educational needs of veterans and the following legislation passed by the General Assembly."