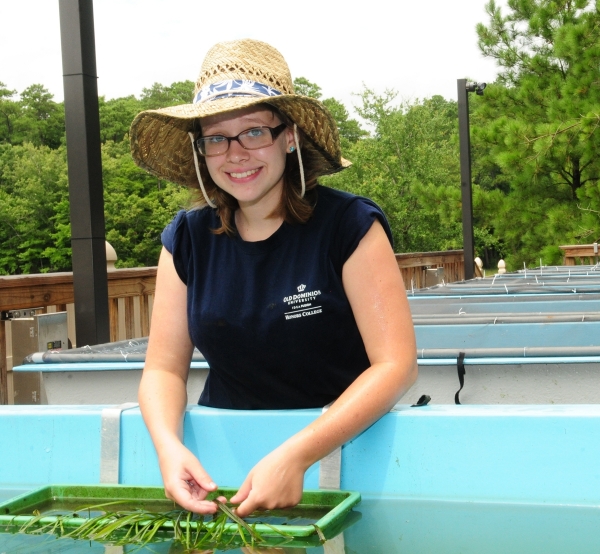 Miranda Smith may have only a few weeks of classes to her credit as a freshman at Old Dominion University, but no one - especially not Richard Zimmerman, one of ODU's most experienced oceanography professors - would say that she's just beginning her higher education.

During her four years at Ocean Lakes High School in Virginia Beach, Smith was part of the Ocean Lakes Math and Science Academy sponsored by ODU. She was a research intern with Zimmerman and his Bio-optical Research Group in the summer of 2012 and returned as a paid intern this past summer.

A senior thesis she wrote at Ocean Lakes on the effects of climate change on eelgrasses dovetailed with a $1 million project that Zimmerman is leading on the effect that ocean acidification is having on eelgrasses. Before this year is out, Smith, though only a freshman, will be listed as a co-author on a research paper Zimmerman's team is preparing on eelgrass adaptability to ocean acidification. "And she'll probably be co-author of another paper we will submit in 2014," Zimmerman added.

To say that Zimmerman is sold on the Ocean Lakes academy project would be an understatement. "Our experience hosting students from the academy has been absolutely fantastic," he said. Students who are accepted into the academy are exposed to a more rigorous curriculum, especially in math and science. The program won a Model Partnership Award for ODU this year from Virginia Beach Public Schools.

A dozen students from the academy conducted research with and/or were mentored by ODU faculty members this past summer. The mentors, other than Zimmerman and his oceanography collaborator Victoria Hill, included John Cooper and Nancy Xu in chemistry; Larry Weinstein in physics; Stephen Beebe in bioelectrics; Cynthia Jones, Hank Liao and James Davies in oceanography; Dean Krusienski in electrical and computer engineering; and Robert Ash in mechanical and aerospace engineering.

Ravi Joshi, the ODU University Professor and Eminent Scholar in electrical and computer engineering who directs the university's participation in the academy, said eight Ocean Lakes graduates who were in the academy matriculated at ODU this fall.

Zimmerman and his research team spent a full summer working at an aqua-farm erected on Virginia Aquarium and Science Center property in Virginia Beach, and they had not only Smith, but also another Ocean Lakes academy student, Tiffany Cedeno, currently a high school senior, as helpers. The aqua-farm was built as part of a $1 million project Zimmerman is leading to test his hypothesis that eelgrasses may actually benefit from the ocean acidification coming from increased carbon dioxide in the atmosphere.

Smith said it was a coincidence that her senior project at the Ocean Lakes academy fit so neatly in with the National Science Foundation grant that Zimmerman received for the aqua-farm project. She entered her high school research, titled "Eelgrass: Adaptation or Annihilation Due to Climate Change," in two science fairs. She placed second in her category at the Tidewater Science Fair and got an honorable mention in the Virginia Junior Academy of Science competition.

"I like the research, but I don't know if it's something I want to do as a career," Smith said. Zimmerman ribs her about changing her mind, yet, for the moment, at least, she is sticking with her plan to major in computer science at ODU as an Honors College and scholarship student. That course of study is a familiar one; her mother manages an electronics lab for the U.S. Navy and her father is a civilian computer technician working with the Navy.

Smith said she would recommend the Ocean Lakes Math and Science Academy to any student who "believes normal classes are too easy and wants a more academically challenging experience."