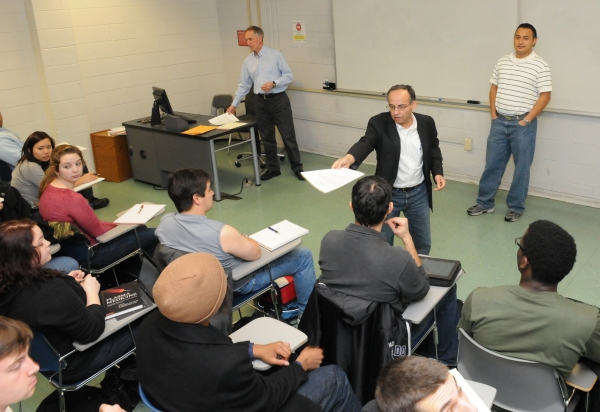 Laroussi hands out the course syllabus. Behind him are Hynes (blue shirt) and Barekzi.

"We think of you as a very special group of students," said Mounir Laroussi, professor of electrical engineering, in welcoming 38 Old Dominion University students to a course - Biomedical Applications of Low Temperature Plasmas - that apparently is the first of its kind anywhere in the world.

At the initial class meeting on Tuesday, Jan. 15, Laroussi stressed the groundbreaking significance of the course, which brings together seniors and graduate students from both biology and electrical engineering for fundamental instruction in the nascent field of plasma medicine. Laroussi said he has researched the issue and found no course similar to this one, which he and colleagues have been planning for more than a year.

Laroussi has been recognized for his international leadership in plasma medicine and is the director of the ODU Laser and Plasma Engineering Institute (LPEI). He is teaching the course with Wayne Hynes, a microbiologist who chairs the ODU Department of Biological Sciences, and Nazir Barekzi, a biologist and researcher with LPEI.

"This is a unique undertaking for two reasons," Laroussi told the students, who will be meeting in a classroom of the Frank Batten College of Engineering and Technology. "For any biologist sitting here today, you must be brave. For any electrical engineer willing to take instruction from a biologist, you are also brave."

After the first class meeting, Laroussi said, "I am very pleased with the good mix of students, evenly divided between sciences and engineering. This is such a multidisciplinary field and the students reflect that very well. I hope that in addition to learning technical material beyond their normal topics of expertise, the students learn what collaboration between people from various disciplines means and what benefits can result from it."

Plasma medicine is an emerging interdisciplinary field encompassing the technology of low-temperature plasmas and applications of the plasmas in wound healing, electrosurgery, cancer treatment and dentistry.

Most plasmas in the universe are supercharged gases that are very hot at Earth's atmospheric pressure; lightning is an example. Controlled in a vacuum, conventional thermal plasmas can also be used in television screens and neon lights. But Laroussi is a pioneer in the cold plasmas, which are also called non-equilibrium plasmas in that the heavy atomic nuclei within them are not supercharged, but light electrons are.

Research by Laroussi and colleagues at ODU has shown that cold plasmas, which are cool to the touch, can be used to kill germs and tumor cells under certain conditions. Laroussi and Barekzi reported in the Journal of Physics D: Applied Physics last October that after 10 minutes of treatment with cold plasma, more than 90 percent of human leukemia cells were destroyed in an in vitro test.

Six years ago, Laroussi created a plasma pencil, a miniature light saber that shoots out a plume of cold plasma. The device, which has been featured in a broad array of popular media, including National Geographic, as well as professional publications, was the source of cold plasma used in the leukemia tests.

The course will kick off with instruction by Laroussi in the basics of non-equilibrium plasmas, including how they are produced. Hynes will follow with cell biology instruction, and Barekzi will conclude the semester with an overview of plasma applications in medicine.

Laroussi is the primary editor of, and a contributor to, a textbook, "Plasma Medicine: Applications of Low-Temperature Gas Plasmas in Medicine and Biology," which was published in 2012 by Cambridge University Press. Three other ODU faculty members who have collaborated with Laroussi are authors of chapters in the book. Michele Darby, Eminent Scholar and University Professor, and chair of the School of Dental Hygiene in ODU's College of Health Sciences, and her colleague, Gayle McCombs, professor of dental hygiene, are co-authors of a chapter on dental applications of cold plasmas. Lesley Greene, associate professor of chemistry in ODU's College of Sciences, is co-author of another chapter on basic cell biology as it relates to cold plasmas.

Michael Kong, who moved from Loughborough University in England in October to join ODU's Frank Reidy Research Center for Bioelectrics, is another editor of the plasma medicine text. Kong, who became Batten Endowed Chair in Bioelectric Engineering within the Batten College, has 10 years of research experience in plasma medicine.