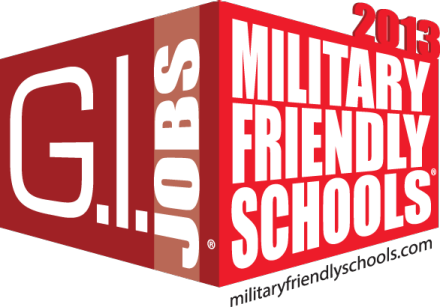 For the fourth straight year, Old Dominion University has been named to the list of Military Friendly Schools by G.I. Jobs, the premier magazine for military personnel transitioning to civilian life. The list honors the top 15 percent of colleges, universities and trade schools that are doing the most to embrace America's military service members, veterans and spouses as students and to ensure their success on campus.

The 2013 list of Military Friendly Schools was compiled through research and a data-driven survey of more than 12,000 Veterans Affairs-approved schools nationwide. The 1,739 colleges, universities and trade schools on the 2013 list exhibit leading practices in the recruitment and retention of students with military experience and have world-class programs and policies for student support on campus, academic accreditation, credit policies, flexibility and other services to those who served.

"For more than 20 years, Old Dominion University has been a national leader in military student services, partnerships, research and other collaborations," noted Dick Whalen, director of military activities. "This recognition underscores the university's ongoing commitment to serve those who serve our nation."

With approximately 25 percent of its student body being military-affiliated and its location in one of the most heavily military-populated regions in the world, ODU supports an increasing population of more than 2,600 veterans using post-9/11 GI Bill benefits to further their transition into the civilian sector.

The university began providing tailored education to service members nearly two decades ago with its innovative televised distance learning courses to Navy ships at sea. More recently it developed a unique CD-ROM program in engineering management for deployed submariners, and offers credit for military training and experience. It operates distance learning sites on more than 15 military installations, in addition to its more than 50 sites across Virginia and in several other states.

Old Dominion has served as the educational partner for NATO's Atlantic Command Transformation for a decade, and is a strong research partner of the Department of Defense through such operations as the Virginia Modeling, Analysis and Simulation Center in Suffolk and the National Centers for System of Systems Engineering.