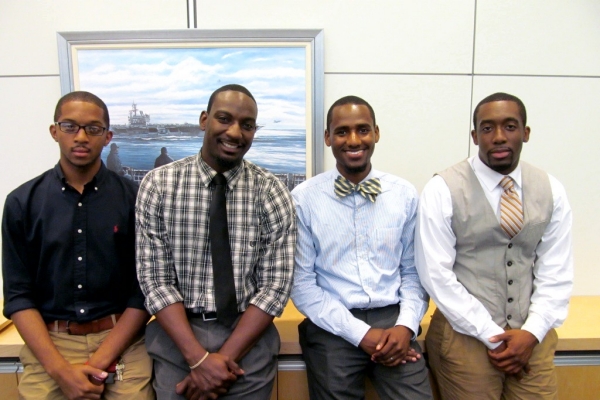 Student TA, the time management mobile app developed by a group of young Old Dominion University entrepreneurs, is being downloaded more than 100 times a day, and has more than 14,000 users after 18 months.

But users of the free, innovative time management app will soon be the beneficiaries of even more "intelligence."

The four businessmen behind Student TA - Angel Henderson, Gregory Rogers, Darius Moore and Raqwon Perryman, who met and created the company ArcDNA while ODU students - were invited to the Department of Defense's Worldwide Education Symposium in Las Vegas in July, where they unveiled a prototype of ADAM, artificial intelligence they created to revolutionize the way humans interact with technology by helping them better manage their lives.

"It's an intelligent-thinking machine. We've developed technology that operates and thinks on its own," said Rogers, senior vice president of engineering for ArcDNA. He said the engineering behind ADAM was designed to reproduce human complexities and abstract thought processes, to teach ADAM how to recognize and process information the same way humans do. This will allow ADAM to think, learn and respond intuitively completely, even without human interaction, as opposed to responding to preprogrammed responses or simply responding to user requests.

The ADAM technology features design and functionality, and when added to their Student TA app, the technology transforms basic electronic devices into intelligent-thinking machines. Once ADAM is released, the technology will operate as a mentor and virtual assistant for all types of users. Specifically for busy students, ADAM can make recommendations when to study for particular classes, provide prompts about upcoming assignments, record whole class lectures then suggest to users when it's time to review the material, and even serve as an academic adviser, all without needing user command or prompt.

Moore, ArcDNA's vice president of Web development, said the creation of ADAM was inspired by time management struggles the four principals have had themselves as students. "It's hard to manage school, part-time jobs and our work with ArcDNA," Moore said.

"As I like to say, not only are we developers, we're also customers of our own products," Rogers noted. ADAM eliminates the issue of balancing a planner or time management app because it operates on its own.

The company, which now has eight employees, has office space in Innovation Research Park @ ODU on Monarch Way in Norfolk, Va. In addition to releasing a new version of Student TA in July, the principals were awarded a contract by NASA to develop a time management app specifically for interns in the Langley Aerospace Research Student Scholars program.

The team will officially unveil ADAM to the marketplace later this year, but plans to release an online video this month, created for Kickstarter.com, the world's largest funding platform for creative projects. "We'll be describing what ADAM is, and people will be able to see it in action," Rogers said.

"We ask that everyone please support our Kickstarter campaign to validate that great ideas can come out of Hampton Roads," Perryman said.