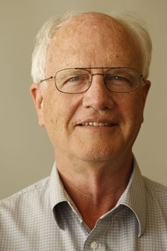 Researchers affiliated with Old Dominion University's two-year-old Climate Change and Sea Level Rise Initiative (CCSLRI) will be key participants in "OCEANS '12, Harnessing the Power of the Ocean," an international meeting expected to draw 2,500 engineers and scientists to Virginia Beach in October.

The meeting is part of a well-established OCEANS Conference series sponsored by the Marine Technology Society (MTS) and the Oceanic Engineering Society of the Institute of Electrical and Electronics Engineers. (IEEE/OES).

ODU is the host academic institution for the meeting and John Broderick, president of ODU, is an honorary chair, together with Will Sessoms, the mayor of Virginia Beach, and Paul Fraim, the mayor of Norfolk.

Numerous ODU faculty members and students who conduct research on topics to be addressed at OCEANS 12 will attend the conference Oct. 14-18 at the Virginia Beach Convention Center. CCSLRI, which was launched at Broderick's direction, will host the meeting's "Sea Level Rise and Inundation Workshop: What? So What? Now What." The half-day workshop will begin at 12:30 p.m. on Oct. 15.

"The time is ripe for a 'think tank' assembly whose aim is to explore challenges and opportunities that our oceans present," Broderick wrote in a letter posted at the OCEANS '12 website. "ODU was eager to support this OCEANS '12 meeting because we are a metropolitan research university in a coastal setting, and we have a deep and growing interest in those research areas suggested by the conference agenda. Our faculty members and students, I feel certain, will be valuable contributors to OCEANS '12 as well as recipients of exciting new ideas."

The OCEANS Conference series has become a major international forum at which scientists, engineers and responsible ocean users can present their latest research results, ideas, developments and applications in oceanic engineering and marine technology. In addition to government and academic attendees, there will be conferees from more than 100 marine-related companies.

Conference topics will include homeland security, safety and efficiency of marine operations, ocean observing, coastal marine conservation and the sustainable use of marine resources. A specific focus will be offshore energy resources, such as wind and wave power.

More than 100 technical sessions are planned at which about 500 research papers will be presented.

But no topics on the conference agenda are more important to CCSLRI than 1) Improving predictions of climate change and weather, and their effects on coastal communities and the nation; and 2) mitigating the effects of natural hazards.

"Oceans '12 will provide opportunities for universities to showcase their research and educational activities in coastal engineering, marine sciences, ocean observing and marine technologies," said Larry Atkinson, the ODU Slover Professor of Oceanography who directs CCSLRI. "And coastal Inundation and sea level rise will be a key local theme."

Elizabeth Smith, the physical oceanographer who coordinates day-to-day activities of CCSLRI, and Wade Smith, who works for Noblis, a nonprofit organization that promotes science and technology, have planned the workshop. It is designed to explore a series of issues:

Workshop speakers will include Robert Tuleya, a research scientist with ODU's Center for Coastal Physical Oceanography, and Burton St. John, an ODU assistant professor of communication and theatre arts. Other will be from the city of Norfolk, the Hampton Roads Planning District Commission, the North Carolina Office of Geospatial and Technology Management, the Virginia Institute of Marine Science, the U.S. Geological Survey, the National Oceanic and Atmospheric Administration, the University of Idaho and the U.S. Army Corps of Engineers.