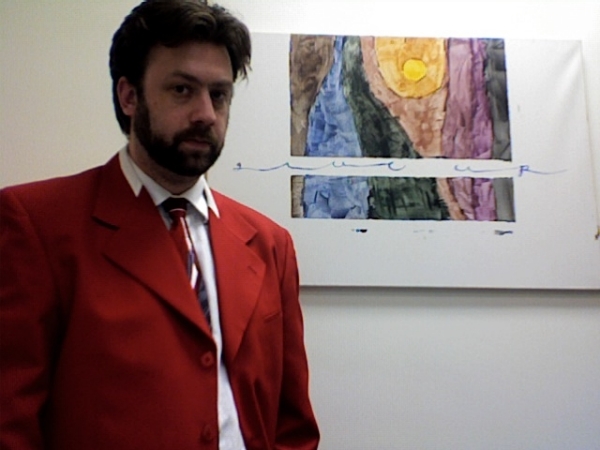 D.E. Wittkower's career as a philosopher of technology has evolved along with Facebook, and it seems only right that the world is turning to him now to help explain just what social media networks mean to us - really mean.

In the last few days of July, commentaries by Wittkower, assistant professor of philosophy at Old Dominion University, were published by the Wall Street Journal ("How Social Media Sucks Us into Arguments About Things Like Gun Control") and Slate Magazine ("How Can Social Media Better Support a Community in Mourning?")

The book that he edited and contributed to, "Facebook and Philosophy" (Open Court, 2010), was written for a general audience, but has been accepted in many quarters as a scholarly resource. "It has been read in several graduate programs, chapters from the book are cited in scholarly articles, and the book has been reviewed in scholarly peer-reviewed journals (Techné and Computers and Composition Online)," he says, sounding more incredulous than boastful. "I've been writing and speaking on social media off and on since then, and it's become one of my main areas of research."

Wittkower has become a regular contributor to the Wall Street Journal's Speakeasy blog, where his commentary on social media and the gun control debate appeared July 30. This commentary, as well as the one in Slate on July 27, are timely responses of a social media critic to the theater shootings in Aurora, Colo., but the young academic takes these opportunities to find broad meaning in discrete events.

"So, go for it!" he advises his readers who may want to engage in political debate (say, about gun control) on Facebook. "But remember Wheaton's Law. You don't do your view any favors when you fail to respect others, and others' views, no matter how wrong they might be. Politics, in the end, is about trying to figure out how to live together with others, and that's what everybody has in mind when they talk politics. Each and every person talking politics is trying to put forth their own best ideas about how we can best live together, and we should always keep that in mind - as hard as it might be ... when they identify the problem with our society as being people like you."

His July 27 article for Slate, the first he has written for that online publication, is part of a new "Future Tense" content project launched by Slate, the New America Foundation and Arizona State University. Future Tense proposes to examine technologies that will soon change the way we live our lives, as well as policy challenges presented by these breakthroughs.

Wittkower was a faculty member at Virginia Tech when that university experienced the campus massacre in 2007, and his Future Tense commentary compares social media and popular media as instruments of healing after a tragedy. Popular media does not fare as well as social media; he finds a lot to praise about the connections Facebook provides mourners.

The trail of Wittkower's scholarship has covered numerous aspects of digital culture, such as friendship online, identity on social networks, and the role of boredom and oversharing in our digital lives. He has worked on other aspects of philosophy of technology and philosophy of culture, on topics including the iPod, employee loyalty, the role of "the cute" online, Full Metal Alchemist, copyright, audiobooks and the Occupy Wall Street movement. He edited "Philip K. Dick and Philosophy," "Mr. Monk and Philosophy," and "iPod and Philosophy."

At Vanderbilt University, from which Wittkower received a Ph.D. in philosophy 2006, his training concentrated on German philosophy and the history of value theory (ethics, aesthetics, social/political philosophy). He has also studied American pragmatist and analytic philosophical traditions. Prior to accepting his first tenure-track position as an assistant professor at ODU in 2011, he taught at Coastal Carolina University, Sweet Briar College, Virginia Tech, University of Missouri-St. Louis, and University of Maine-Orono. He was given the 2011 Award for Distinguished Teaching by Coastal Carolina's College of Humanities and Fine Arts.

Wittkower's wife, Lucinda Rush, who holds master's degrees in music education and in library and information sciences, joined ODU Libraries as an education reference librarian earlier this year. The couple, who have two children, are working on their first co-authored journal article, with the working title of "Educational Expropriation of SNS Consumer Training." The article identifies opportunities for effective pedagogical innovation based on student experience with social networking sites (SNS).

A Google search these days for information about Wittkower would likely turn up the book "Facebook and Philosophy." It serves as his calling card, tying his name to the Facebook phenomenon and gaining him recent invitations to present his research in Texas, England and two institutions in the Netherlands.

But getting the word out through scholarly channels is often slow, not fast-paced enough for someone with Wittkower's interests, and that explains his eagerness to write for the popular media. "In my area of expertise, there are often important and valuable concerns which call for less traditionally academic approaches," he said. "We philosophers of technology believe that technological development has been attended by a failure to engage in meaningful public debate about the social and political meaning of design choices and modes of adoption of new technologies.

"Several of us are also of the belief that we ought to try to instigate, deepen and refine this public debate ourselves, and consider this kind of public philosophy to be part of our proper activity and professional responsibility as philosophers of technology. Traditional peer-reviewed work is sometimes too slow a process to be responsive enough to influence foundational public discussions on emerging technologies, and is rarely sufficiently available or engaging to be widely enough read. We are hoping that in the future this kind of public engagement will be better recognized in promotion and tenure processes."

The scholarly writing of Wittkower can be a complex weave, interpreting Aristotle, Albert Camus and Martin Heidegger in the context of present-day use of social media. Yet his overall style is layman-friendly. In his chapter, "A Reply to Facebook Critics," from the book "Facebook and Philosophy," he deftly slaps the 20th-century French Existentialist Paul Sartre onto the Facebook Wall, remembering Sartre's mantra that the meaning of our lives is up to us to create, which is both liberating and terrifying.

The 19th-century German philosopher Arthur Schopenhauer - who is known as having been something of a grump - is targeted by Wittkower as a potential enemy of Facebook. Schopenhauer wrote, "It is only in the microscope that our life looks so big," referring to people deluding themselves into believing their lives are significant.

"Of course, Schopenhauer wanted us to take the 'big view,' and to take our eye away from this particular microscope," Wittkower writes in the book chapter. "But Schopenhauer also said that boredom is 'direct proof that existence has no real value in itself,' and that 'human life must be some kind of a mistake.' I want to defend the microscope. I want to defend our absorption in our own fleeting interests, peculiar obsessions and momentary concerns - for the same reasons I want to defend happiness and the pursuit of truth, beauty, creativity and family. And I want to defend the value of sharing them with friends, and sharing in the similarly arbitrary and possibly unimportant interests, obsessions and concerns of our friends. What else than this is life?"

Wittkower also can have some fun with his dense philosophy of technology. Again from the book chapter, this time in reference to a quiz on Facebook, "Which Disney Princess Are You?":

"When a young girl takes the quiz and decides to post the result, she may be attempting to project a certain controlled image about herself - or, perhaps, she's honestly hoping that the quiz will be able to tell her something new and guiding about herself. When a not-so-young woman takes the quiz, she may be being ironic. When a male college student takes it, he might be being sarcastic. When I take it, I'm trying to make my students uncomfortable."