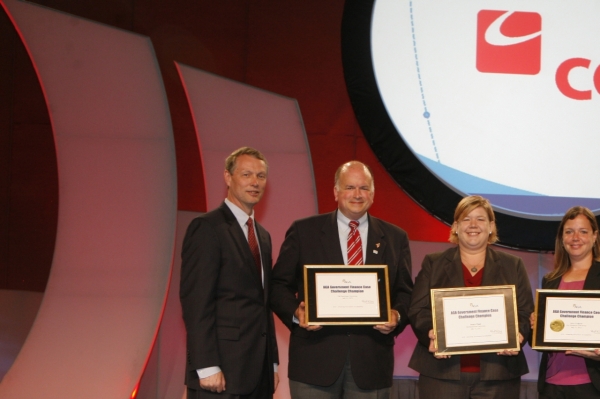 For the second year in a row, a team of graduate-level accounting students from Old Dominion University's College of Business and Public Administration (CBPA) has won the national graduate-level Government Finance Case Challenge, sponsored by the Association of Government Accountants (AGA).

"It has really been a great experience," said Sara Crabtree, captain of the ODU team for the past two years. The other team members included Matt Stewart (also on the team in 2011) and Jessica Plank. All three students are recent graduates of the CBPA's Master of Science in Accounting program.

The project, known as a Citizen Centric Report, required the teams to take real financial data provided by the city of San Diego, and turn the information into a four-page report that non-accountants could understand.

Crabtree said that in previous years, the contest utilized made-up numbers from a fictitious city. "This year they used real numbers for a real city, San Diego," she said. "The challenge for us last year was in having to make up assumptions for the gaps in the fictional data. This year's challenge was sorting through an overwhelming amount of data that was made available to us and having to keep the focus on what the average citizen would be most interested in wanting to know about their city government."

In the finals of the Case Challenge, the ODU team members had a 25-minute window to present their report and explain their thought processes to a panel of four judges, answering 10 minutes of questions at the end about the decisions they made regarding what to include in the report, and how best to convey the information.

"The judges were very specific in their questions, but through our classes and research, we learned a lot about the financial management of a city and were prepared," Crabtree said.

The ODU team, which was advised by Douglas Ziegenfuss, chair of the accounting department, was one of three finalist teams the AGA flew to San Diego for the national conference.

The Graduate Government Finance Case Challenge is part of the AGA's Citizen-Centric Reporting Initiative, which is intended to foster innovative means of communication between governments and their citizenry by providing government financial information to citizens in a format that is clear and understandable, updated regularly, delivered to all, easy to locate, honest in breadth and technically accurate in detail.

The format of the Case Challenge includes community information such as population figures, regional characteristics and government goals for the community; a performance report on key missions and service; cost and revenue information; and a look forward to the year ahead.