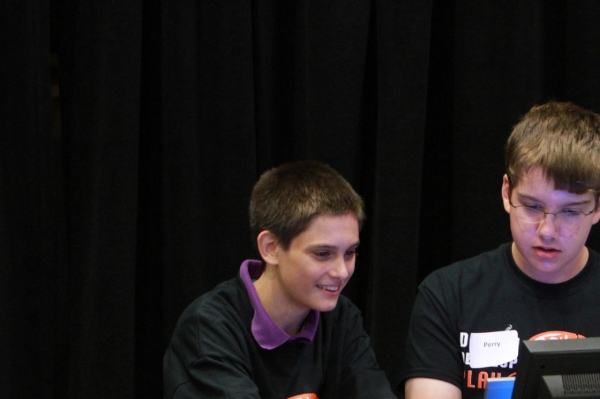 "This is one of the craziest things you're ever going to see," a confident Rori Domino declared.

The precocious 14-year-old Rosemont Academy student was about to unveil the video game he had created at the Intermediate Game Development Camp hosted by Old Dominion University's Virginia Modeling, Analysis and Simulation Center (VMASC).

Domino was one of 12 aspiring video game designers, plus another four campers who participated in VMASC's inaugural Robotics Camp who showed off their creations to their parents, ODU staff and faculty - and to each other - at the end of their weeklong camps.

Domino's game, a version of the popular game Tank War that features pigs trying to take over the world, played on the large screen in the auditorium of the E.V. Williams Engineering and Computational Sciences Building, as he talked the audience through the rules of the shoot-'em-up game.

Each of the five-minute presentations featured ingenious twists of standard video game designs by the young scientists. Games such as Galactic Mail, Tank War and Wingman Sam had a familiar look, but each took on the personality of its young, bright creator.

Yuzhong Shen, associate professor in ODU's Department of Modeling, Simulation and Visualization, one of the instructors for the VMASC game development camp, told the audience about the growth potential of video game design as a career, with salaries averaging $90,000 per year. Also, Shen said: "Modeling and simulation has much overlap with the gaming industry."

VMASC has run the camps every summer for several years, but this is the first time that the product developed by the campers was demonstrated before an audience. This year's VMASC summer camps also included, for the first time, a robotics camp. Pre-teen and teenage students built their own robots, under the guidance of Yiannis Papelis, research professor of virtual environments at VMASC, and showed off their bells and whistles to the crowd at the reception.

"You'll notice each of the robots has their own personality," Papelis said, as the wheeled machines navigated their way around a curved course marked with black tape, taking evasive action when obstacles were placed in their way.

Through the week, robotics campers learned how to use parts to build the structure, sensors to provide awareness, and motors to provide movement to the robots, which were then run through obstacle courses and mazes, all the while competing against other campers' robots.

Building the device taught each participant basic STEM skills, as well as the importance of teamwork. Demonstrations of a wide variety of VMASC's own flying robots, housed in the building's state-of-the-art robotics laboratory, were also given.

ODU's Virginia Modeling, Analysis and Simulation Center is one of the world's leading research centers for computer modeling, simulation and visualization. The mission of the center is to conduct collaborative MS&V research and development, provide expertise to government agencies and industry, and to promote ODU, Hampton Roads and Virginia as a center of MS&V activities. Working with more than 100 industry, government and academic members, VMASC furthers the development and applications of modeling, simulation and visualization as enterprise decision-making tools to promote economic, business and academic development. Annually, the center conducts approximately $10 million in funded research.