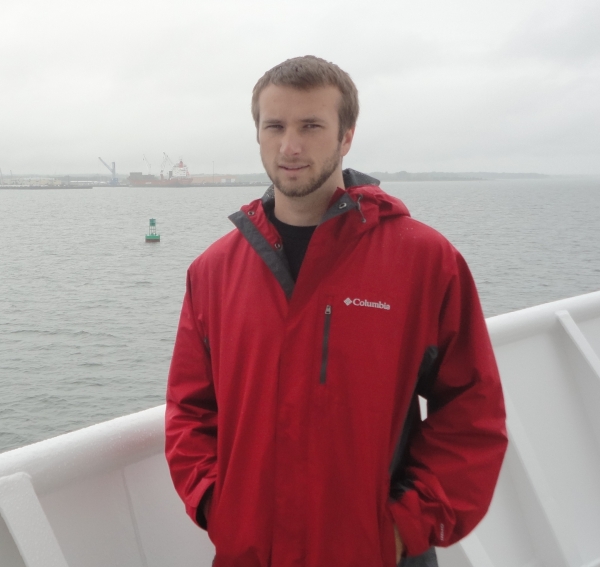 Old Dominion University graduate student William Boll had the experience of a lifetime in June as an intern researcher on the Okeanos Explorer research vessel of the National Oceanic and Atmospheric Administration (NOAA).

He not only helped with the important scientific work of mapping the canyons off the Northeast United States, but he also had the opportunity to see the transit of Venus across the sun and an exquisite full moon while at sea, as well as to view the Spanish tall ship Juan Sebastian De Elcano under sail and en route to OpSail in Norfolk.

The Okeanos Explorer left from Norfolk on May 29 for the two-week cruise to map canyons that separate the mid-Atlantic's continental shelf from the ocean abyss. Multi-beam sonar on the vessel creates topographic maps of the ocean floor and can send video and sonar data to scientists on shore in real time.

"Ever since I wanted to study oceanography, I knew I wanted to work with NOAA," said Boll, a master's student in physical oceanography at ODU who holds a bachelors degree in physics from Georgia Tech. "Also, this internship ties in well with my research because they too analyze acoustic data," one tool Boll is using in his own research studying wave energy. He is working on his master's thesis under the guidance of Chester Grosch, professor of ocean, earth and atmospheric sciences at ODU's Center for Coastal Physical Oceanography.

An active part of NOAA's research fleet since 2010, the Okeanos Explorer is the only federal ship dedicated to systematically exploring the ocean. In addition to sonar, the ship carries and deploys a camera sled called Seirios for taking high-definition, wide-angle video of the ocean floor, as well as a remotely operated vehicle called Little Hercules for taking close-up shots of deep-sea plants and animals.

This was Boll's first cruise on such a large ship and he said he will never forget the highlights.

"I had a great time aboard Okeanos Explorer. I worked with scientists interested in the same field, learned state-of-the-art software and also helped to collect data that will aid research for years to come," he said.

He visited the bridge as often as possible, he said. "The view from there was mesmerizing." And one day he was the first person on the deck to spot fishing buoys dead ahead. "The bridge team had enough time to safely maneuver around the gear. They then thanked me and told me of possible troubles that could have arisen if we had hit the equipment. I thought about how something so small could have great consequences and began to recall my accomplishments that have helped me get to where I am today."

In addition to the transit of Venus, the full moon and the Spanish sailing vessel, Boll also was captivated by the sight of bioluminescence in the ocean. "After a calm day at sea, during the night the water glowed this incredible hue of light blue. It was almost like a hot springs on the back of the ship where the props were. It is due to the plankton that light up when disturbed. It was amazing to see the dolphins dive into the water and have a stream of light behind them."

His duty hours were from 8 p.m. to 4 a.m., which meant he had to sleep during the day. "As a graduate student I am used to staying up late hours. Onboard I usually woke up for a large lunch, since I was making up for missing breakfast, then went about my day with activities such as reading, working out in the gym or spending time up at the bridge. I would then eat dinner and, shortly after my stomach settled, I would take a nap before my watch began at 8."

Boll was enthusiastic about the meal service. "The food was excellent! I had a wide range to choose from, including steaks, crab, curry chicken and even hamburgers and hot dogs."

Summing up, he said: "I was fortunate to be selected for this scientific exploration. NOAA's mission to carefully study the atmospheric and marine environments, and then spread that knowledge to the public while aiming to conserve resources, aligns with my ideals of what a scientist should be."