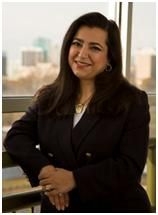 As associate professor and the Director of the Center for Gaming and Simulation at Norfolk State University, Dr. Rasha Morsi, who received her ME in Computer Engineering and a Ph.D. in electrical and computer engineering from Old Dominion University, 1996 and 2002 respectively, is no stranger to honors. In January 2008, she was named one of Diverse: Issues in Higher Education's Emerging Scholars - one of ten selected nationwide. In 2007, she received the Norfolk State University 'University Award of Excellence' - an award given to a faculty member who has performed in a superior manner in teaching, scholarly activity, and service. It is one of the highest honors the University can bestow on one of its faculty. At the college level, she has been named Teacher of the Year, Top Engineering Faculty, and outstanding grantsmanship.

Her latest achievement likewise highlights her prowess in academia. She joins eleven Virginia professors for the state's public and private colleges and universities in receiving Governor McDonnell's 2012 Outstanding Faculty Awards. They were recognized in February at the Jefferson Hotel and received $5,000 checks underwritten by the Dominion Foundation.

"This year's recipients truly represent the Commonwealth's commitment to excellence and diversity in its higher education system," said Governor McDonnell. "The public service and scholarly contributions of these faculty members are well-known not only on their respective campuses, but nationally and internationally."