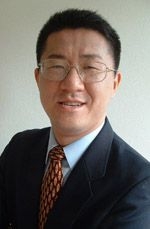 Qi "Harry" Zhang, an Old Dominion University health economist in the College of Health Sciences, has been appointed to a U.S. Department of Health and Human Services scientific review panel that helps to determine how federal funding is apportioned to programs that aim to improve health care and quality of life.

For the three years beginning March 1, 2012, Zhang will be a standing member of the Healthcare Effectiveness and Outcomes Research (HEOR) Study Section of the Agency for Healthcare Research and Quality (AHRQ).

The ODU associate professor of community and environmental health has developed a research specialty in recent years probing food assistance programs, hunger and obesity. For example, a grant he received last year from a highly competitive program of the University of Kentucky Center for Poverty Research will allow him to look more closely at food insecurity among children in the United States.

Zhang's work as a researcher and scholar brought him to the attention of the HEOR Study Section three years ago, and he has provided periodic professional assistance to the panel since then. "I feel honored to join the prestigious HEOR Study Section, which is the primary review panel for AHRQ and consists of the top health services researchers in the country," he said. "I have been an ad hoc member for the review panel since 2009 and it is a formal recognition from the AHRQ director for my service by appointing me as a standing member. The appointment also is national recognition of the research quality of our school, college and university."

The AHRQ director, Dr. Carolyn Clancy, sent the invitation to Zhang to join the section.

HEOR is responsible for reviewing applications for funding from the AHRQ, which has an annual budget of around $610 million and serves an important role in health care reform. Projects proposed include a broad range of services to improve health care delivery and quality; to measure effectiveness of existing programs, including focuses on specific population groups such as minorities, children, the elderly and residents of rural areas; and to employ analysis using sociological, demographic, economic, psychological, anthropologic and other social science approaches.

Zhang, who specializes in statistical analysis, is seeking in his latest child hunger project to identify the risk factors for very low food security in households, as well as in communities. "Except for the traditional risk factors, such as single mothers and being in a minority-concentrated neighborhood, we expect to find that households with unemployed adults may have a higher risk, since most regions still have not climbed out of the recession. The clustering map of very low food security households will provide a visual tool for policymakers to estimate the severity and concentration of the problem in given areas," he said.

Concurrently, he is working on a three-year project supported by a $184,995 U.S. Department of Agriculture grant that is titled "Local Economic Conditions, Food Assistance and Food Insecurity Among Households with Children." Early last year, Zhang and several collaborators began work on a $1.6 million National Institutes of Health project that is titled "Causes and Interventions for Childhood Obesity: Innovative Systems Analysis." That project, which will also last four years, will try to get to the roots of the childhood obesity epidemic in the United States and find ways to reverse the trend.