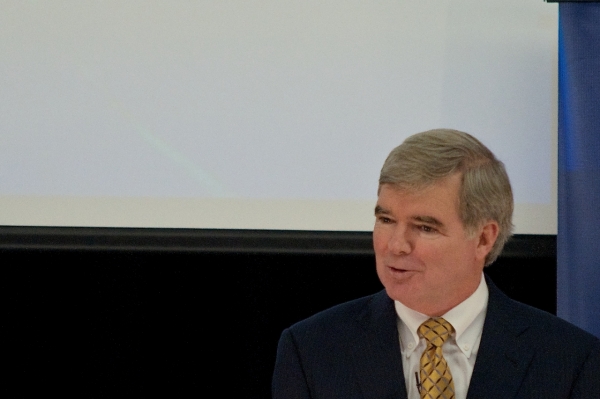 Intercollegiate athletics is part of the "secret sauce" that helps make America such a great country, NCAA President Mark Emmert told an audience of 800 at Old Dominion University on Tuesday, Oct. 23.

Emmert, who was invited to the campus by ODU President John R. Broderick, said foreign academic colleagues frequently tell him how they wish the spirit and loyalty to school that U.S. college sports helps foster could be replicated in their countries.

"They look at us as a model in this area," said Emmert, who delivered his President's Lecture Series address to an audience that included many of ODU's student-athletes.

Emmert was candid about the challenges facing intercollegiate athletics in the United States, but said they're nothing new. He related a story about the first recorded athletic competition between universities, a rowing race between crews from Harvard and Yale in 1869. Emmert said the race was sponsored by a railway that was seeking to attract paying passengers. "It was a commercial enterprise."

The NCAA president said ethical and safety challenges facing collegiate sports around the turn of the last century forced the intervention of then U.S. President Theodore Roosevelt. "He told the universities to get their act together, or he was going to shut these competitions down," Emmert said. "That led to the creation of the NCAA."

The President's Lecture Series event, in the Big Blue Room of the Ted Constant Convocation Center, attracted an audience of Hampton Roads residents and students who shared a keen interest in the issues facing collegiate sports. Emmert didn't shy away from controversial topics, either in his talk or in answering questions from the audience, posed by moderator Ted Alexander. He addressed topics such as the NCAA's extensive rulebook, athlete recruiting and the "punitive and corrective" sanctions imposed by the organization on Penn State over the recent sex abuse scandal.

Emmert also addressed the issue, no doubt of interest to the student-athletes in the room, of pay for scholarship athletes. He said he's in favor of a small stipend being paid to athletes so they can do something as simple as buy a pizza on the weekends. But Emmert doesn't want to go so far as paying athletes for performance. "If you want student-athletes to be employees, then hire entertainers," he said.

The most important goal of intercollegiate athletics is to provide its 400,000 student-athletes, most of whom will not go on to professional sports, with a degree and the "soft skills" of discipline, work ethic and competitiveness needed to succeed after leaving college, Emmert said. "Our goal is not to put the best basketball players on the court. Our goal is to put the best college students on the court."

Emmert's appearance at ODU was partly the result of Broderick's previous service on the NCAA's Division I board of directors and the Division I Presidential Advisory Group.

One of the main themes of the NCAA under Emmert's leadership has been the balance between athletics and academics. Prior to assuming his current role, he had been president of his alma mater, the University of Washington, since 2004. Emmert led the university to its standing as second among all public and private institutions in research funding, with $1.3 billion in grants and contracts per year. Before returning to his alma mater, Emmert served as chancellor of Louisiana State University from 1999 to 2004.

A Washington native, Emmert earned a bachelor's degree in political science from the University of Washington and holds both a master's and a Ph.D. in public administration from Syracuse University.