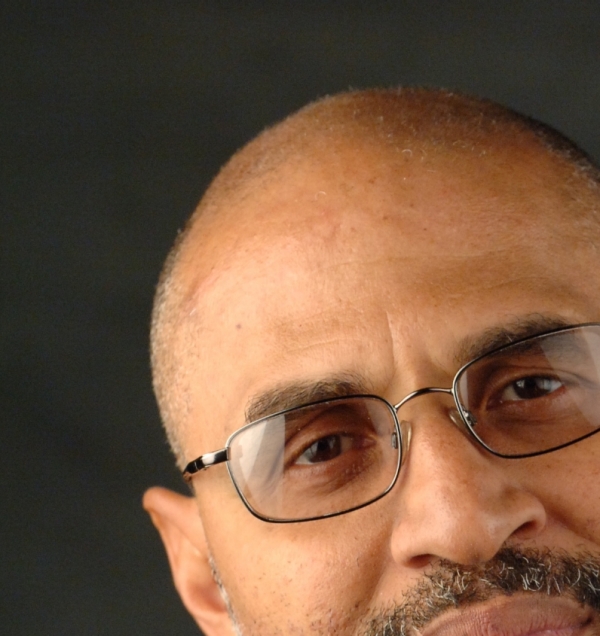 Tim Seibles, associate professor of creative writing at Old Dominion, is among the 20 finalists for the 2012 National Book Awards.

"It's a journey, with memories of when I was a teenager, mixed with my current understanding of the world as I am today," said Seibles, who called the work "somewhat" autobiographical. "It involves memories, both inward and outward, that we make as we become adults." Some of the poems are written from his perspective. Others involve the voice of someone else, but someone who shares his experience. Collectively, "Fast Animal" tells a story about how life changes for all of us.

This is the first National Book Award nomination for Seibles, who has taught at ODU since 1995. He is a past Provincetown Fine Arts Work Center Fellow, and the recipient of an NEA Fellowship and the Open Voice Award from the National Writers Voice Project.

Charles Wilson, dean of the College of Arts and Letters, sent the following announcement to colleagues yesterday: "Please join me in congratulating Associate Professor Tim Seibles for being named this morning a Finalist in Poetry for the National Book Award. As we have known for some time, Tim is most deserving of this honor!"

One of America's foremost poets, Seibles threads the journey from youthful innocence to the whittled-hard awareness of adulthood in his latest poetry collection. Along the way it immerses the reader in palpable moments - the importance of remembering, the burden of race and the meaning of true wakefulness.

In addition to his faculty position at ODU, Seibles is a teaching board member of the Muse Writers Workshop. He also teaches workshops for Cave Canem and teaches part time for the University of Southern Maine's Stonecoast MFA in Writing Program, a low-residency program that features writers from all over the country.

His poems have appeared in New Letters, Red Brick Review, Dark Eros, Ploughshares, New England Review, The Artful Dodge and others, and an anthology called In Search of Color Everywhere.

All of the 2012 Poetry finalists are first-time nominees who have published previous volumes of poetry. David Ferry is the author of eight collections of poetry and translation and the Sophie Chantal Hart Professor Emeritus of English at Wellesley College. Cynthia Huntington teaches creative writing at Dartmouth College and was named Poet Laureate of New Hampshire in 2004. Alan Shapiro is the author of 10 collections of poetry and a winner of the Los Angeles Times Book Prize. Susan Wheeler is a recipient of a Guggenheim and currently directs the creative writing program at Princeton University.

"We are particularly pleased that the finalists include some of the most well-known literary names in America and new names and faces to the National Book Awards," said Harold Augenbraum, executive director of the National Book Foundation, which administers the awards.

The winners in Fiction, Nonfiction, Poetry and Young People's Literature will be announced at the 63rd National Book Awards Benefit Dinner and Ceremony at Cipriani Wall Street in New York City on Nov. 14. Television and radio host, political and pop culture commentator, journalist and actor Faith Salie will host the event, which will be streamed live on the foundation's website, www.nationalbook.org.

Winners receive $10,000 and a bronze statue; finalists receive a bronze medal and $1,000. The evening is chaired by Morgan Entrekin, Lynn Nesbit and Shelley Wanger. Novelist Elmore Leonard will receive the National Book Foundation's Medal for Distinguished Contribution to American Letters, to be presented by author Martin Amis.

The Foundation's Literarian Award for Outstanding Contribution to the American Literary Community will go to New York Times chairman and publisher Arthur O. Sulzberger Jr., to be presented by the host of NPR's "Fresh Air," Terry Gross.

Publishers submitted a total of 1,285 books for the 2012 National Book Awards, including 311 in Fiction, 479 in Nonfiction, 181 in Poetry and 314 in Young People's Literature. The finalists were selected by four distinguished panels of judges who were given the charge of selecting what they deem to be the best books of the year. Their decisions are made independent of the National Book Foundation staff and board of directors; deliberations are strictly confidential. To be eligible for a 2012 National Book Award, a book must have been published in the United States between Dec. 1, 2011, and Nov. 30, 2012, and must have been written by a U.S. citizen.