Oceans '12 Is Hosted by ODU Scientists and Engineers 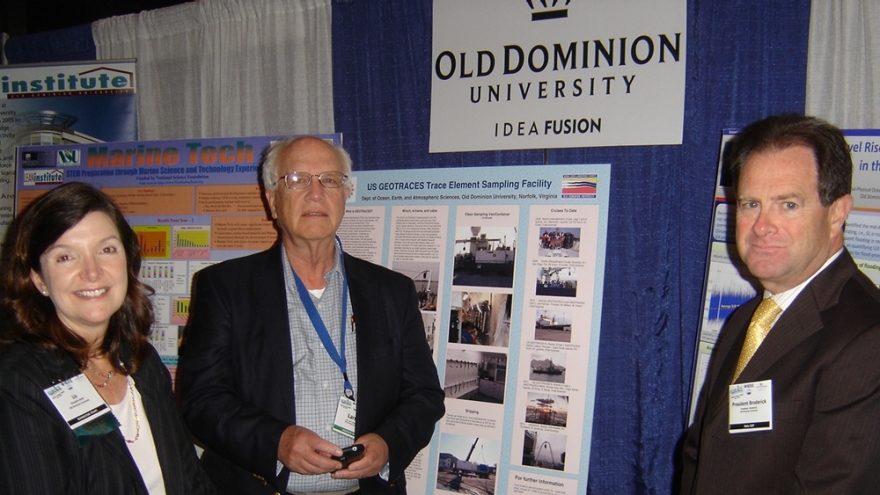 Smith (from left) and Atkinson with Broderick at ODU booth.

Old Dominion University President John Broderick was an honored guest at the opening plenary session on Tuesday, Oct. 16, of "OCEANS '12, Harnessing the Power of the Ocean," a conference that has attracted an international contingent of 2,500 engineers, scientists and public policy experts to Virginia Beach this week. ODU is the academic host for the conference, all sessions of which are at the Virginia Beach Convention Center.

The well-established OCEANS Conference series is sponsored by the Marine Technology Society (MTS) and the Oceanic Engineering Society of the Institute of Electrical and Electronics Engineers (IEEE/OES).

Broderick visited University Row on Tuesday and met with faculty members who were at the ODU exhibition booths, including Larry Atkinson, the Slover Professor of Oceanography who directs CCSLRI, and Elizabeth Smith, the day-to-day coordinator of CCSLRI.

On Monday, the conference's first day, Smith led the "Sea Level Rise and Inundation Workshop: What? So What? Now What" that attracted 60 participants.

"There is a lot of doom and gloom in our discussion of this subject," Smith said, "but what was great about this workshop was that it brought people together to talk solutions - how we adapt, how we better work together and how we communicate better about sea level rise."

Workshop topics included why the global ocean sea level rises, why the land subsides in the mid-Atlantic region and how to forecast and show storm surge flooding at high resolution with sea level rise.

Workshop speakers included Robert Tuleya, a research scientist with ODU's CCPO, and Burton St. John, an ODU assistant professor of communication and theatre arts. Others were from the city of Norfolk, the Hampton Roads Planning District Commission, the North Carolina Office of Geospatial and Technology Management, the Virginia Institute of Marine Science, the U.S. Geological Survey, the National Oceanic and Atmospheric Administration, the University of Idaho and the U.S. Army Corps of Engineers.