Once funding for ODU's new Chemistry building was approved, talks quickly turned to including a new planetarium, which was originally designed to be a part of the Alfriend Chemistry Building in the late 1960s. Initial designs started in 2016, construction began in 2019, and the building dedication was held in April 2021.

Foremost, it will serve as a planetarium, a spotlight of community outreach for ODU. It will be used as a lecture hall where it includes Digistar 7 for astronomy coursees, is capable of projecting 3-dimensional proteins & molecules, and includes NASA's Science on a Sphere modules. It will operate as a symposium auditorium capable of live streaming presentations to and from remote locations all displayed on the dome in 4K resolution. It will be a truly remarkable facility for our students and the community.

Immerse yourself in a journey through space and time in our breathtaking 121-seat planetarium. From the comfort of a plush, reclined seat you'll feel like you're flying through Earth's atmosphere to the far reaches of the universe.

"But this is no ordinary digital theater. It has been designed, from the ground up, as an innovative facility capable of serving many of the University's needs."

About Michael and KT Lê 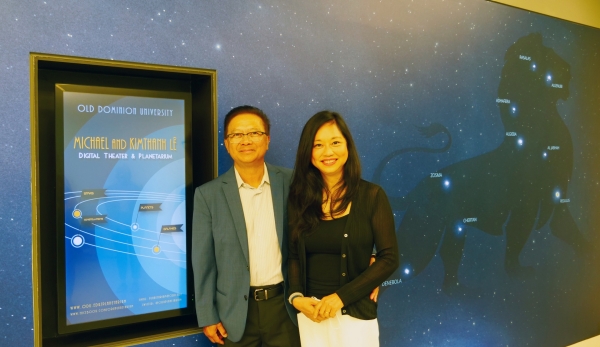 Alumnus Michael Lê is founder and CEO of Advantco International, LLC. He lives with his wife, Kimthanh (who goes by KT) in Raleigh, North Carolina, but he returned to Old Dominion University in 2019 to speak to budding entrepreneurs as part of a computer science lecture series. Lê comes from very humble beginnings and he did not shy away from sharing how he ended up at ODU.

His life was capsized after the end of the Vietnam War. Lê fled Vietnam on a boat meant to carry 200 passengers, but it transported 800 refugees from Vietnam to Subic Bay, Philippines. Lê then found himself in Guam. After weeks of uncertainty Lê was flown to a military post that had been temporarily reoutfitted. "I ended up staying in one of those refugee centers back in 1975, Indian Town Gap Pennsylvania," Lê said "and I was sponsored by a person in the Navy to come to Norfolk, and that's when I learned about ODU."

As an undergraduate Lê said he worked "four part-time jobs while taking a full course load." Lê graduated from ODU's College of Sciences with a Bachelor of Science majoring in computer science in 1980. Thanks to a successful internship, his first job was with IBM in Downtown Norfolk. "I was a systems engineer trainee." Lê's career catapulted after leaving IBM. He is an incredibly hard worker, he's able to recognize where the gaps exist in technology, and has since founded and sold two multi-million-dollar companies. Lê wanted to give back to the University that helped provide his education, and the new planetarium was that opportunity. It is a facility that will be with the University for decades to come, and educating students and the public alike.

To create new content for our shows, a production studio is included. The studio is designed to let creative professionals design and build complete full-dome shows outside of the theater. This will allow us to easily create content for each grade based on Virginia's Science Standards of Learning. Students, faculty, and staff have complete artistic control over how to build a show and can do so even while the planetarium dome is in use.

In early 2019, NASA donated $70,000 worth of surplus equipment to the Pretlow Planetarium. Items include pieces of space suits from the 1980s and 1990s, a piece of the Gemini X heat shield, and a full in-flight suit. In 2020, another $27,000 worth of NASA artifacts were acquired and added to our collection.

Our meteorite collection has been steadily growing since 2017. With over $20,000 worth of meteorite fragments, our pieces range from the Chelyabinsk impact of 2013 to lunar specimens to a piece of Argentina's Campo Del Cielo weighing 63 pounds!

In honor of the 50th anniversary of the Apollo 11 Moon landing we designed and built an interactive display case where you can touch an actual piece of the Moon. This lunar meteorite was once part of the Moon, blasted into space from a large meteor collision, and eventually made it's way to Earth. 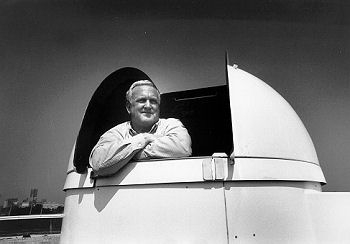 Opened in 1967, the 40-foot domed planetarium was used by the introductory astronomy classes which were were first implemented at Old Dominion University by the late C.S. Sherwood, III. It was was utilized as a hub for STEM education and outreach until its retirement in 2021.

The planetarium was named for Miss Mary Denson Pretlow at the request of the anonymous donor who presented the University with the funds to build the planetarium. The University's Board of Visitors was receptive to naming the building after Miss Pretlow due to her thirty years of service (1917-1947) as head of the Norfolk Public Library as well as her career as a distinguished historian and librarian.