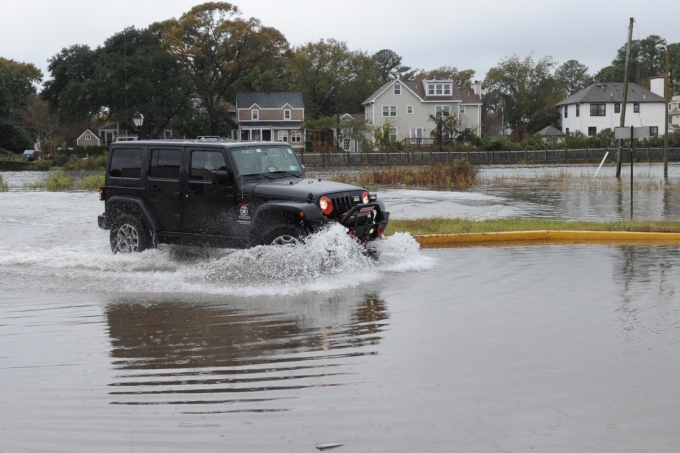 Old Dominion University researchers played a key role in the Commonwealth of Virginia's Coastal Resilience Master Plan Framework, released Oct. 22 by Gov. Ralph Northam. The framework lays out the core principles of the Commonwealth's approach to coastal protection and adaptation.

Announced by Northam in an event at the LaValette Avenue Kayak Launch and Fishing Pier in Norfolk, the plan provides the blueprint for producing Virginia's first Coastal Resilience Master Plan by the end of 2021.

This process has been informed greatly by research about future flood risk for coastal communities produced by the Commonwealth Center for Recurrent Flooding Resiliency (CCRFR), of which Old Dominion University is a founding member.

The Future Sea Level and Recurrent Flooding Risk for Coastal Virginia report by CCRFR, released earlier in 2020, suggests that by 2040, 424 square miles of land in coastal Virginia will be at risk of permanent flooding from relative sea level rise. That figure is poised to rise to 649 square miles by 2080, with as many as 111,545 buildings in the Commonwealth at risk of being below the high tide line.

The report also characterized the potential impacts of recurring minor, aka "nuisance," flooding. By 2040, an additional 144 square miles of land and 380 miles of roadway will be at risk from regular flooding caused by extra-high tides and nontropical wind and weather events.

"Historical data reveal that the number of days of nuisance flooding in Norfolk has doubled since 2000 and that trend is increasing throughout Coastal Virginia," said George McLeod, the study's lead author and senior geospatial fellow with CCRFR and assistant director of Old Dominion University's Center for Geospatial Science, Education and Analytics. "The year 2040 is just around the corner and developing an understanding of future flooding locations, frequency and duration is a critical first step for all resilience planning, adaptation and mitigation efforts."

The report was developed following a request from Virginia's secretary of Natural Resources to assist in the development of a coastal resilience master plan, one of the requirements of Gov. Northam's 2018 executive order increasing Virginia's resilience to risk from sea level rise.

"This call for aid from the governor's office underscores ODU's growing reputation as the go-to source for expertise in complex coastal systems modeling," McLeod added.

The data demonstrate that the Hampton Roads, Accomack-Northampton (Eastern Shore) and Middle Peninsula planning districts will be the most severely impacted by relative sea level rise.

The authors recommend that the work be extended, with additional analysis performed, to quantify the regional effect of sea level rise on a more localized scale and look for areas of potential critical impact. This screening process could serve as a guide for resource managers and engineers making planning decisions for the Commonwealth.

"Studies such as this are necessary steppingstones to identify the evolving hazards associated with sea level rise and climate change," said Tom Allen, ODU geography professor and co-author of the study. "Identifying building assets and infrastructure exposed to tidal flooding, extreme rainfall and combined flooding that are exacerbated by sea level rise informs decision-makers and opens the door to risk reduction and planning for adaptation and mitigation. These are key underpinnings of coastal resilience that are making Hampton Roads renowned."

The report also suggests additional research is required to capture the risk that storm surge poses to coastal areas on top of the risks posed by sea level rise.

Created in 2016 following legislation introduced by Virginia's General Assembly, the Commonwealth Center for Recurrent Flooding Resiliency - which features expertise from Old Dominion University, the College of William & Mary, and the Virginia Institute of Marine Science - conducts interdisciplinary studies, and provides training and policy guidance in the area of recurrent flooding resilience to the Commonwealth.