By Annette Finley-Croswhite and David Simpson 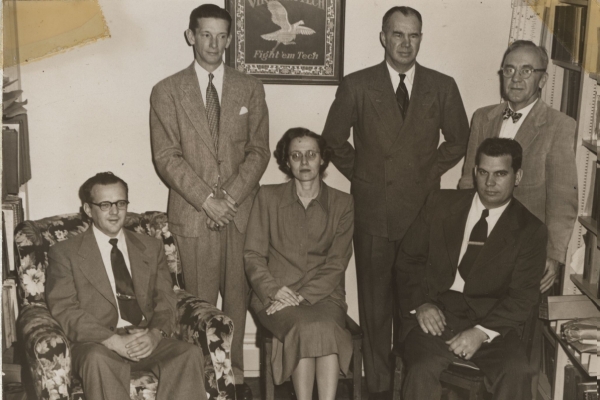 Phillips earned her bachelor's degree from Marshall University and her master's degree from Duke University. She taught in the mining town of Logan, West Virginia, for nine years in the public school system before taking up a position at Elon College in North Carolina.

She came to Norfolk in 1943. During World War II the military needed physics instructors, so Phillips secured short-term contracts through the Norfolk Division of the College of William and Mary and the University of Virginia to teach physics to U.S. Army and Navy personnel. In 1945 she became a permanent employee of "The Division," which became Old Dominion College in 1962 and Old Dominion University in 1969 and where she taught primarily in the math department but sometimes in the physics department. She rose through the ranks and was made a full professor in 1965. Professor Phillips served as chair of the Department of Mathematics in the mid-1960s and retired in 1979.

Phillips was one of just a few women teaching in the STEM disciplines during her career. In an interview housed in the University Archives, she said she became chair by accident because the man selected for the position had died unexpectedly of a heart attack. "[I]t was so close to the opening of school and the market was tight ... and [the administration] had to make a selection quicky for a department chairman. So they asked if I would take it until Christmas and I ended up - it was two years before we got a replacement."

Professor Phillips taught at a time when faculty were not required to publish; however, she was expected to maintain a 5/6 teaching load — five courses in the fall and six courses in the spring — representing an extraordinary contribution to the teaching mission of the institution. She also served as Old Dominion University liaison to the American Association of University Women.

Read about other ODU Faculty Women in STEM at our website.