Acclaimed Teacher, Smashing Researcher to Be Honored at Provost’s Spotlight 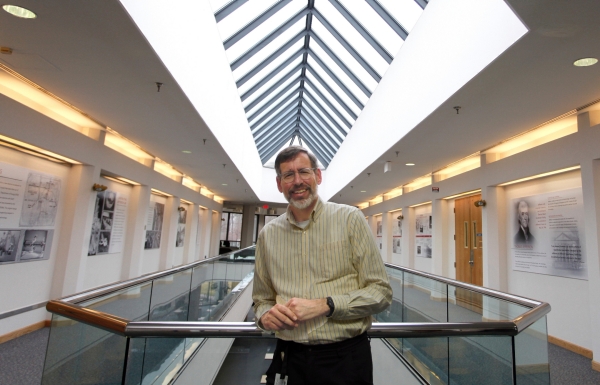 Lawrence Weinstein rarely slows down. If he's not smashing atoms at the Jefferson Lab, he's lighting a fire in Old Dominion University undergraduates with his enthusiasm for physics. Or publishing research in prestigious journals like Nature. Or spreading the word about science and math in books and talks and videos.

Weinstein, a professor of physics, University Professor and Eminent Scholar, will be the guest of honor at the fall 2021 Provost's Spotlight. The face-to-face event will take place on Nov. 1 from 3:30 to 5 p.m. at the University Theatre, 4608 Hampton Blvd., Norfolk. (Details below.)

It's the latest honor for Dr. Weinstein, who has received many accolades at ODU for faculty excellence and distinguished teaching, as well as an Outstanding Faculty Award from the State Council of Higher Education for Virginia. He is a fellow of the American Physical Society.

Outside the classroom, he's a researcher with the ODU Experimental Nuclear Physics Group at the Thomas Jefferson National Accelerator Facility in Newport News.

"I study the nucleus like a 5-year-old does," he has said. "I hit it hard and see what comes out."

Ahead of the Provost's Spotlight, he took time to answer a few questions from the Center for Faculty Development.

Tell us briefly about your early life and what drew you to your field.

I grew up in New York City and its suburbs. Math was my first love and I was lucky enough to have fabulous math (Mr. Law) and physics (Dr. Arzt) teachers at Teaneck High School. I chose to attend Yale, where I played bridge and Dungeons & Dragons and where I met my wife square dancing. I finished undergraduate physics in two years and then took graduate courses. A friend of mine told me he had to turn down a summer job working at Fermilab (the big accelerator lab outside Chicago) because he did not have a driver's license. I rushed over to the Physics Department and volunteered to take his place. I have been smashing atoms ever since. After a year making money working on radar systems, I went to MIT for my Ph.D. (and square danced at MIT too).

What brought you to ODU and the Jefferson Lab?

I was already doing research at Jefferson Lab, which was going to be (and became) the next great lab in my field. My sister lives here. Then ODU decided to hire a large group of excellent young people to do research at JLab. How could I go wrong?

Tell us briefly about your role at the Jefferson Lab and the thrust of your research.

I am leading experiments to help understand how protons and neutrons behave in nuclei, what fraction of time they orbit the nucleus independently and what fraction of time they spend paired up. Nucleons are a lot like humans. When far apart they ignore each other, when close they can attract, but when they get to be too close they repel each other violently. An "experiment" is actually a several-year project of a couple dozen physicists (with help at critical times from 100 more).

I have led many JLab experiments, led the million-dollar ODU projects to build six very-large (15-foot) multi-thousand-wire particle detectors in the center of the CLAS Spectrometer and then six more (20 years later) for the CLAS12 spectrometer, was elected to lead the 200+ member CLAS Collaboration, and then later was elected to serve as chair of the 1,600-member Jefferson Lab Users Organization.

What is your teaching philosophy? What are some ways you put it into practice?

My goal is to make physics as approachable as possible, and to explain the applications of physics to real life. In the classroom, I use lecture demonstrations to show the students applications of abstract equations, and "ConcepTests" to engage students during lecture to think about the concepts. In smaller classes, I will send the entire class to the whiteboards to work on problems while I roam the room to guide them and correct their misunderstandings.

Have you made a conscious effort to widen the audience for physics and scientific thinking? How?

I have given dozens of physics demonstration shows at area high schools and other venues, trained ODU students to give demo shows, given many public lectures, helped organize our physics booth at the Virginia Children's Festival, and organized many other outreach efforts. In addition, I have written two books on estimation, "Guesstimation: Solving the World's Problems on the Back of a Cocktail Napkin" (with ODU Professor of Mathematics John Adam) and "Guesstimation 2.0: Solving Today's Problems on the Back of a Napkin," both published by Princeton University Press. I have given dozens of talks on Guesstimation to groups ranging from the Portsmouth Women's Club to 1,000 physicists as after-dinner speaker at an American Physical Society meeting.

I have also created a video course, "Nuclear Physics Explained," for The Great Courses. This covers all of nuclear physics at an accessible level, including basic concepts, radiation, nuclear energy, nuclear weapons, the sun and astrophysics, and applications (including food safety and medical).

The Provost's Spotlight is an opportunity to hear distinguished faculty members talk about their life and work in a stimulating question-and-answer format. The fall 2022 Spotlight will be held Monday, Nov. 1, from 3:30 to 5 p.m. at University Theatre, 4608 Hampton Blvd., Norfolk. The event includes an introduction by Provost Augustine O. Agho and an interview conducted by CFD Director Annette Finley-Croswhite. A reception will follow in the Atrium. Presented by Academic Affairs and the Center for Faculty Development.