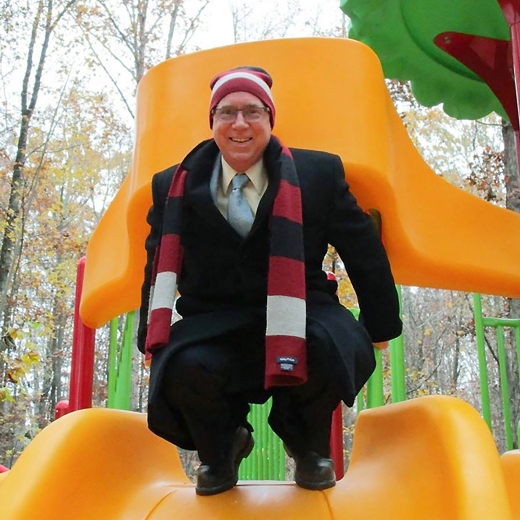 Christopher Rapp during the opening of Fighting Creek Park in Powhatan County, Virginia (2014).

Many of the scholarships at Old Dominion University come with a backstory, but none so poignant as the Christopher Kelly Rapp Memorial Scholarship in Civil and Environmental Engineering.

Rapp, a 1994 civil engineering graduate, was one of 12 victims of the 2019 Virginia Beach Municipal Center mass shooting. He was 54.

"When Chris' life was taken from him, our family lost a wonderful son and brother, and the world lost an exceptional person," Michael Rapp, Chris' father wrote in a letter.

Christopher Rapp did not take life for granted. He jumped into his interests wholeheartedly - dancing, biking, hiking, traveling and playing musical instruments - all with determination and dedication.

When Rapp took an interest in his Scottish heritage, he taught himself to play the bagpipes and joined the Greater Richmond Pipes and Drums and later the Tidewater Pipes and Drums band.

Rapp made a deal with wife, Bessie, that once he finished his master's degree at Virginia Tech, he would learn to ballroom dance. "We took classes and he loved it," she said. "He wanted to do it every time."

He supported Bessie's Filipino culture as well and became an active member of the Kultura Pilipino group and Filipino-American Association in Richmond, Virginia.

Rapp's interests were only underscored by his dedication to public service.

Over the years, Rapp served as director of public works for several municipalities including Caroline County, Powhatan County and Stafford County.

He and Bessie wanted to move back to Hampton Roads to be closer to his aging parents. He took a position as a stormwater management regulatory engineer for the City of Virginia Beach just 11 months before the shooting.

The Monarch Memorial, created to honor those killed, was dedicated on May 31, three years to the day of the shooting.

After the ceremony, Bessie, Michael Rapp, and other relatives met at the reception to sign a memorandum of understanding for the donation. Rapp's will had bestowed funds for the creation of a scholarship at ODU.

The $1,600 scholarship will be awarded annually to a civil and environmental engineering student who has graduated from a Virginia high school and has demonstrated financial need.

"This is the best way to keep his memory alive," Khan Iftekharuddin, interim dean of the Batten College of Engineering and Technology, told Bessie after the reception.

Rapp had strong ties to ODU. His mother, Patricia Rapp '94, was a lecturer and served as assistant director of ODU's English Language Center. She passed away in April 2022.

His late brother, Eric, earned his bachelor's degree from ODU and his other brother Timothy was a student here as well.

"Chris always spoke highly of the time he spent at Old Dominion University and regarded the education in the engineering field that he received there vital to his career," Michael Rapp wrote. "It prepared him well for a wide range of opportunities, not only by providing him with the essential tools for his career achievements but also by nurturing in him the spirit of public service."

The scholarship was a way for him to pay it forward, Bessie explained. "It's what he wanted."

"He was very kind and caring and devoted his time and energy to things close to his heart and to helping others," Bessie said. "This will help the students to have a good future, a brighter future, in whatever they want to do."