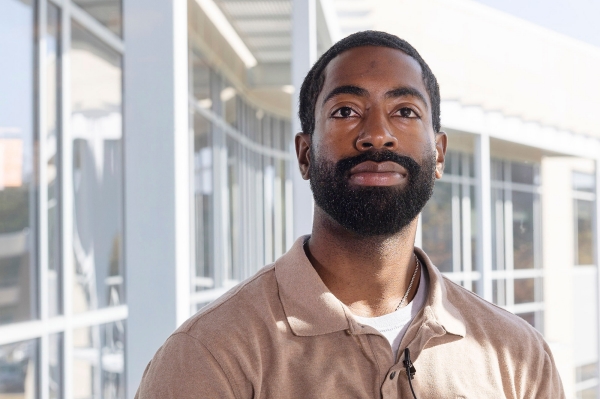 Each year, one college or department from the University selects a veteran student, staff or faculty member for recognition. This year, the Batten College of Engineering and Technology chose Betton, a master's student in the mechanical engineering program.

Betton was nominated by Kim Bullington, advisor for ODU's Student Veteran Association and chief departmental advisor and programs manager for the Department of Engineering Management and Systems Engineering.

"Chris is an exemplary student who has navigated the transition from military to student while maintaining a very high GPA through his undergraduate work and now his graduate work," Bullington said. "He is a great example of a successful student veteran who will be instrumental in solving the engineering problems of the present and the future."

"I think being a veteran was important to my life because it showed me how important it is to serve others and to sacrifice for the betterment of other people," he said. "I think that I have found a lot of purpose in serving the military and working towards a common goal with others."

At ODU, Chris has worked in the Advanced Manufacturing Lab in the Batten College of Engineering and Technology since 2020. At the height of the pandemic, when personal protective equipment (PPE) was in short supply, Chris was part of a team that designed and manufactured PPE for the doctors and nurses at Sentara Hospital.

Today, Chris is the manager of that same lab. As part of his daily routine, he helps to design tools and devices for use in applications both within ODU and the community.

As a child, Betton was surrounded by engineers in his hometown of Waldorf, Maryland. His father was a systems engineer and his mother worked in management and consulting for engineering firms. "I remember in the summertime going to work with my mom and getting to talk to some of her co-workers about projects they were working on. And that definitely influenced me to get into engineering."

A sixth-grade STEM project helped to cement his love of engineering. "We worked on a small hovercraft prototype made out of Styrofoam and a tiny motor powered by a nine-volt battery," Betton said. "My team and I won first place locally for our hovercraft design. After seeing that accomplishment and having so much fun designing the hovercraft, I knew engineering was something I definitely wanted to get into."

However, Betton didn't take the direct path to engineering.

He has always been an avid musician - playing saxophone, bass clarinet and piano. In high school, he played in the school's symphonic band. It was his dream to play for the Navy band.

But the results of the ASVAB test changed his trajectory. "I was convinced to try out for the nuclear program instead of the Navy band," he said. "I'm really happy about that decision now because the nuclear program really prepared me for college. It taught me how to study and taught me the discipline that I needed to accomplish my goals."

After graduation, Betton hopes to work as a design engineer for space systems, either for a private company or for NASA.