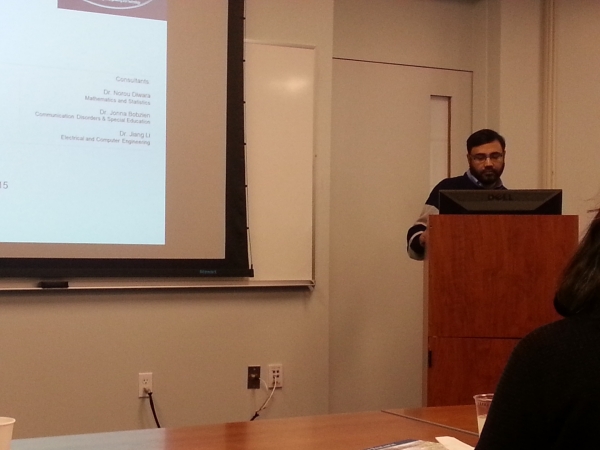 Sponsored by the Old Dominion University Office of Research, the 2014 Multidisciplinary Seed Funding Presentations brought awardees from across campus to show-off their research to a captivated crowd at the Learning Commons. After brief welcome remarks from the ODU Vice President for Research, Dr. Morris Foster, College of Engineering researchers took control of the podium.

The first presentation of the day was given by Dr. Dean Krusienski, associate professor of electrical and computer engineering, reviewing research in the "Investigation of Musical Rhythms in the Brain." Alongside co-PIs, Douglas Owens, Instrumental Music Education/Undergraduate Music Education, and Jerry Shih, Director of the Comprehensive Epilepsy Program, Mayo Clinic, Florida, Krusienski used the electrocorticography to test human perception of music. By varying the rhythms, patterns and tempos of the music perceived by subjects, the research team hopes to create new knowledge that may allow for more effective - compared to language - communication tools and entertainment devices that may be used by disabled individuals. While the research is still in early stages, the team has already earned, in addition to the Office of Research Multidisciplinary Seed grant, a National Science Foundation EAGER grant and has had a course created, MUSC 596 - Musicians' Health.

Dr. Khan Iftekharuddin assumed the second presentation spot, enlightening the audience to his research team's project, "3D Facial Expression and Visual Stimuli Analysis for Autism Spectrum Disorders (ASD)." It is widely known that rather large medical expenses can accompany the diagnosis of ASD. With the number of those being diagnosed with ASD rising sharply from 23% to 78%, over 2002-2006 and 2002-2008, respectively, there comes an associated desire to find a less expensive method of disability analysis. This project, therefore, looks to detect the psychophysical features connected with ASD patients through automatic and computational methodology as means to reduce correlated diagnosis and treatment costs. Iftekharuddin and co-PIs, Michel Audette, assistant professor of modeling, simulation, & visualization engineering, and John Harrington of the Department of Pediatrics, EVMS & CHKD, are attempting to establish a phenotype of identifiable features that distinguish those with ASD. From there, the team endeavors to create a hardware-software interface that can capture the expressions of a subject's face, in particular discerning facial elements that characterize ASD.

Gangfeng Ma (PI) and Xixi Wang (co-PI) of the civil and environmental engineering department teamed up with Hua Liu (co-PI), political science & geography, for the research project titled "Development of A Multidisciplinary Approach for Assessing Climate Change and Sea Level Rise Impact on Tidal Wetlands in the Lynnhaven Bay, VA." Collaborating in a project which involved sea level rise effects on the Lynnhaven Bay wetlands, each researcher focused his particular expertise to investigate consequences: hydrodynamic modeling (Ma), hydrological modeling (Wang), and geospatial analysis (Liu). To date, the results of the project include five journal publications, a proposal currently being submitted to the National Science Foundation, and three conferences proceedings. The project has also provided research opportunities and support for graduate students, three Masters and one doctoral.

To read more about the projects that were presented, visit http://researchfoundation.odu.edu/pdf/idc/SPA6-30-2014.pdf.