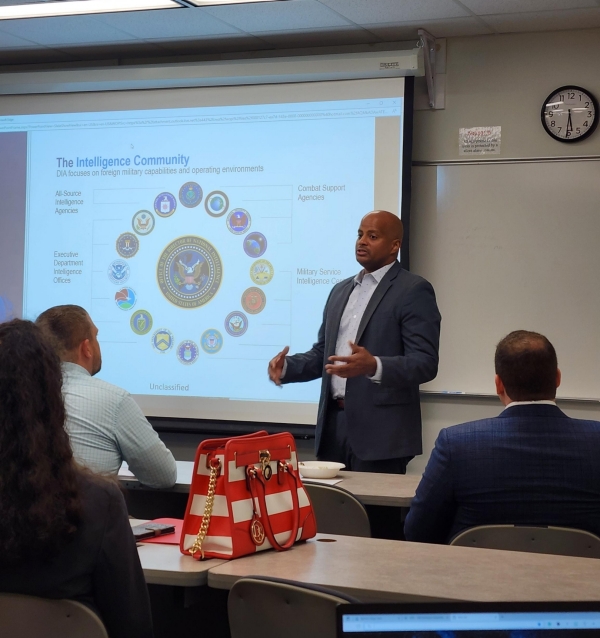 The event, which was also live-streamed, featured discussion surrounding career opportunities with the DIA. The DIA is a Department of Defense combat support agency. The organization produces, analyzes, and disseminates military intelligence information to combat and noncombat military missions. It serves as the Nation's primary manager and producer of foreign military intelligence and is a central intelligence producer and manager for the secretary of defense, the Joint Chiefs of Staff and combatant commands.

Michael Foster, CFO, FACDO, presented ODU School of Public Service's Director of the Graduate Certificate in Public Procurement and Contract Management, Dr. Joshua Steinfeld, with a DIA Challenge Coin for his work as a DIA person of contact and for fostering a positive pipeline for ODU students seeking employment with the agency. Mr. Foster informed the audience that a recent ODU graduate who attended the Career Networking Event last year has completed the extensive and arduous interview and background check process with DIA and will begin work with the agency shortly.

For those seeking more information about a career with DIA, please contact Dr. Steinfeld (jsteinfe@odu.edu) or visit their website at https://www.dia.mil/.

HOW TO FIND US

We are located in Constant Hall, Suite 2084, 2nd floor (street side of the bldg) on 49th Street directly across the street from the large parking garage near the football stadium.

Recommended deadline to apply for May 2023...

Recommended deadline to apply for May 2023 graduation. Use the online application for graduation in LEO Online. See... (More)