The Paul W. Kirk Jr Wetland Research Awards were established to support undergraduate and graduate student research and related travel for wetland studies with botanical or mycological implications or relevance.

The Global Marine Species Assessment began in late 2005 and is headquartered at the Department of Biological Sciences at Old Dominion University, managed by Professor Kent Carpenter.

This site is a data base for plant slides and other images, i.e., scanning electron micrographs, diagrams. To date, about 10 000 have been loaded.

ODU ADP sets forth standards for training and certification and ensures that all scientific diving conducted by ODU faculty, staff, and students is done in a manner that will maximize their protection from accidental injury and/or illness.

The Department of Biological Sciences' Aquatics Facility, completed in 2010, is housed on campus and is a modern facility providing over 6,000 ft2 of space for marine and freshwater research. The facility includes a large but dividable common room with natural lighting for large tanks, five separate experimental laboratories including two biosafety II laboratories suitable for aquatic disease research, a technician's office, two bathrooms with showers, and a field research preparation and processing room adjacent to a loading dock. The entire facility is supplied with dechlorinated freshwater, treated seawater, and a low pressure air system for holding aquatic animals and plants.

The Blackwater Ecologic Preserve borders the Blackwater River in Isle of Wight County, Virginia. Included on this 319 acre property are unique plant communities and some of the rarest species in the state of Virginia. Most important is the longleaf pine community which is the northernmost community of this type in the United States. In addition to the longleaf communities, the preserve's amazing diversity includes pocosins, river bluff, cypress swamp, old field, and riverine habitat.

The ODU Herbarium provides a well curated collection of vascular plants and bryophytes for use in teaching, research, and public service. Major emphasis is placed on development of excellent representation of all taxa in the local flora (southeastern Virginia and northeastern North Carolina), including the Dismal Swamp and the Blackwater Ecologic Preserve. Our herbarium represents the definitive collection of the regional flora, and is consulted by the Natural Heritage Program of the Commonwealth of Virginia. We also loan specimens to specialists in different parts of the country and the world. Due to our exchange program, the herbarium also has a good representation of genera of plants of the southeastern United States as well as representative orders on a worldwide basis. Specialized areas of interest include development of collections of both native and cultivated poisonous plants as well as strength in parasitic angiosperms. At present, the total number of mounted specimens is approximately 26,000. The teaching collection contains approximately 3,000 specimens.

The Phytoplankton Analysis Laboratory (PAL) has been monitoring phytoplankton populations, algal blooms, and potential toxin producing species in Chesapeake Bay and several of its major tributaries since 1985. Since 1997, in a more extensive coverage of Virginia estuaries, phytoplankton water and sediment samples have been analyzed for Pfiesteria spp., Pfiesteria-like organisms (PLO), and other toxin producing algal species

The Electron Microscopy Laboratory is equipped for transmission election microscopy (including X-ray diffraction, scanning transmission electron microscopy/STEM and X-ray microanalysis) and scanning electron microscopy. Complete specimen preparation equipment and supplies are available for a wide variety of biological and nonbiological specimens. A well-equipped darkroom provides a complete environment for negative development and print or slide making. The laboratory director and laboratory specialist are available for consultation in experimental design and electron microscopic technique. The laboratory has extensive experience in processing many types of specimens for a variety of users at the university and from the community.

Research at a glance 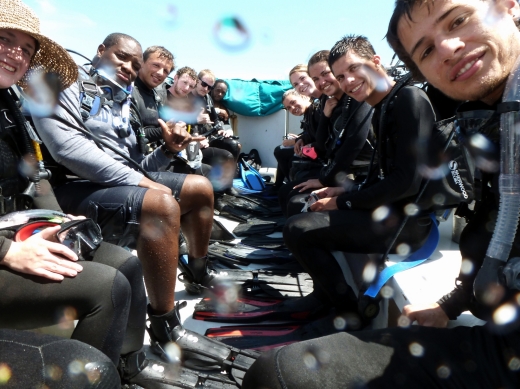 Old Dominion University Chapter of the Botanical Society of America