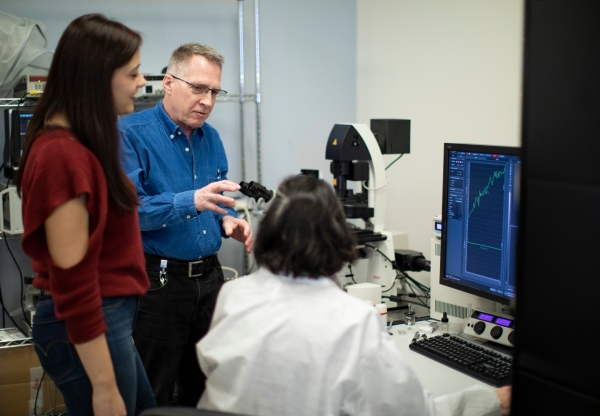 This year Prof. P. Thomas Vernier from Old Dominion University and Prof. Marie Pierre Rols from University of Toulouse were awarded the 2021 and 2022 Frank Reidy Awards for Outstanding Achievements in Bioelectrics, respectively. The awards were presented in October at the 4th World Congress on Electroporation and Pulsed Electric Fields in Biology, Medicine, and Food and Environmental Technologies in Copenhagen.

Established in 2010, the Frank Reidy Award for Outstanding Achievements in Bioelectrics recognizes a scientist working in the field of bioelectrics who has made significant scientific contributions to the fields of electrical effects on cells and tissue.

Prof. P. Thomas Vernier is a world-renowned pioneer scientist and teacher whose critical scientific work, combined with his work philosophy, inspired, and supported many others in the bioelectrics community over the past two decades.

In several groundbreaking studies, in parallel with A. Pakhomov and J. Weaver's teams, Prof. Vernier demonstrated that nsPEF could open nanopores in the cell plasma membrane and intracellular membranes. This work further led to his team demonstrating intracellular calcium release and mitochondrial membrane depolarization by nanosecond pulses. Both processes are critical in many biochemical processes in cell function and can be utilized to modulate cellular functionality. His work inspired and expanded the field of electroporation both in applications of cancer therapy and electrostimulation of excitable cells.

Prof. Vernier was among the first scientists to apply molecular dynamic simulation (MDS) to study the molecular basis of electroporation thus allowing us to "see" molecules in action on a time and distance scale that is not possible experimentally. Using MDS, his team tracked and defined stages of pore formation and annihilation dynamics and identified the reorganization of interfacial water as the driving event in electropores formation. His team demonstrated that the externalization of the phospholipid phosphatidylserine (PS), normally located on the inner side of the plasma membrane, is a distinct, electropermeabilization-related process separate from the PS externalization associated with apoptosis.

Prof. Vernier work both in MDS and his collaborative studies in electrostimulation with very short nanosecond pulses were further expanded in his contribution within the framework of a multidisciplinary research initiative (MURI) starting in 2014. These recent studies, with colleagues Esin Sözer and Josh Zimmerberg, led to the first time-dependent measurements of electroporative transport using giant unilamellar vesicles (GUVs) exposed to nsPEF showing consistency with MDS results and significant difference from cellular exposures. These were also the first experimental results consistent with the MDS-based lifetime of purely lipid electropores to be less than 50 ns.

More recently Prof. Vernier started to study the immune stimulatory effects of electroporation, a novel dimension that remains poorly understood. Being among the few groups studying the effects of electroporation on immune cells, his team, including colleagues Claudia Muratori and Flavia Mazzarda, found that the damage created by nanosecond pulses is sensed intracellularly by the immune platform known as the inflammasome. Inflammasomes are protein complexes of the innate immune system that initiate inflammation in response to either exogenous pathogens or endogenous danger signals

In addition to his outstanding scientific accomplishments, Prof. Vernier is known for his detailed, yet clear biophysics talks, his training of many young scientists both in his lab as well as in international initiatives such as the electroporation schools organized in Ljubljana and Norfolk, and his collaborations with a wide range of national and international labs. His unique ability as a scientist and teacher partly comes from his broad training and degrees in Biology, Chemistry, and Electrical Engineering, in addition to his industrial engineering experience. He is widely respected and applauded for his scientific work and is an example of caring and enthusiastic support to multiple generations of researchers in many countries.