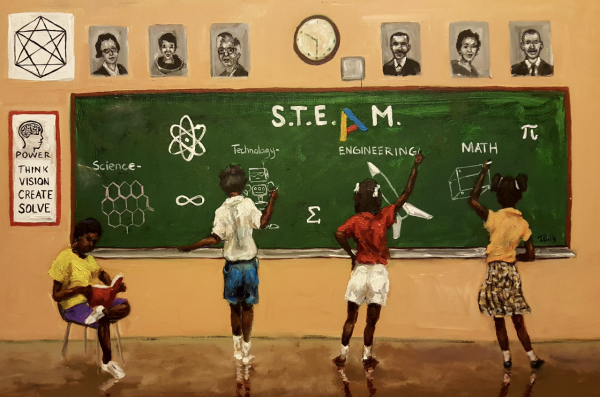 Our fruitful relationship with the artist Ted Ellis, who will serve as scholar-in-residence next year for the College of Arts & Letters, began less than two years ago.

At the time, Ellis was vice chair of the national 400 Years of African American History Commission. Melvina Sumter, director of ODU's Institute for the Study of Race and Ethnicity, was organizing the University's commemoration of the 400th anniversary of the first African landing in North America. Melvina heard him speak at a meeting in August 2019. She was impressed with his passion and his message of reconciliation. When she saw his artwork, she knew ODU had to partner with him.

A centerpiece of our Martin Luther King Jr. commemoration last January was the unveiling of Ted's painting "Our Royal Family," which portrays the Tucker Family Cemetery in Hampton, where the descendants of one of the first children of the 20 Africans who landed in 1619 are buried.

The day after the event, an exhibition of 30 of Ted's works, including "Our Royal Family," opened in the Goode Theatre. A tapestry of history, it documented 400 years of the Black experience in America, ranging from Mary Peake, who taught the children of former slaves near Fort Monroe, to the civil rights march on the Edmund Pettis Bridge in Selma.

And starting next month, Ted will serve as scholar-in-residence for the College of Arts and Letters. His passion for community outreach, evident during the brief time he was here last year, will serve him well in his new role. Ted will engage virtually with ODU students, as well as community groups and businesses, both in Hampton Roads and beyond. His work will focus on five areas: racism, stereotypes, implicit bias, microaggressions, and diversity and inclusion.

Ted's enthusiasm about this position coupled with the rich historical foundations of his artwork are bound to inspire spirited discussion. "I want to provide opportunities for us to talk and grow together and become more familiar with each other," he says. His ultimate goal is to create "healing moments," which our society certainly could use more of.

I want to thank Provost Austin Agho, Kent Sandstrom, dean of the College of Arts and Letters, and Melvina for making this happen. Ted will serve a one-year term initially, with the hope that his association with Old Dominion will continue beyond that. I believe this partnership will take the University's affirmation of diversity and inclusion to new heights.

You don't have to wait until January, though, to acquaint yourself with Ted's work. I invite you to visit our Barry Art Museum, which recently acquired his painting "Writing a New History (STEAM)," portraying the next generation of African American scientists and engineers. And a virtual tour of his exhibit at the Goode is available at bit.ly/TedEllisVirtualExhibitLiveTour

His art is sure to intrigue and educate you.