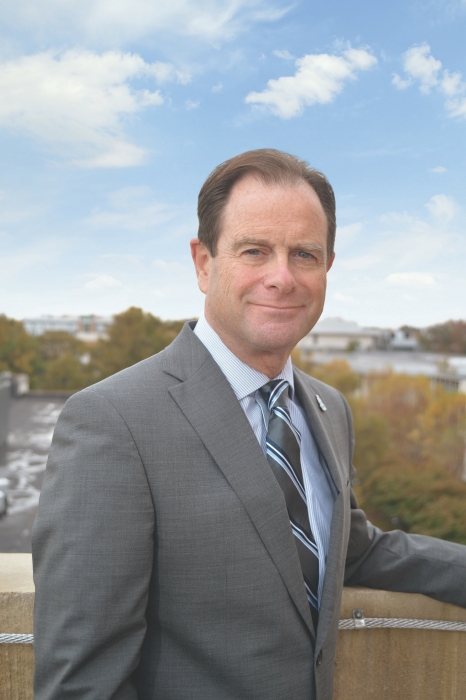 Old Dominion University's master builder is about to retire after 21 years of incomparable service to the University. Dave Harnage is the heart, soul and architect for the way our campus looks today.

As vice president for administration and finance and, most recently, chief operating officer, Dave led the design and construction of more than 16 buildings at Old Dominion - from the Virginia Beach Center in 1999 to the Education Building this year. And he's been a driving force behind plans for the Barry Art Museum, which is due to open in the fall of 2018.

Dave has been adept at envisioning the big picture as well as crystallizing the small details.

In an interview in our latest issue of Monarch magazine, he put it this way: "I believe in spending a lot of time on buildings - how do the materials work together, how does it fit into the campus, the shape of the buildings, the glass you use, the finishes inside the building.... All of these ingredients go together to make a successful building." (To read more about Dave, go to www.odu.edu/monarchmag)

His contributions to the university extend far beyond buildings. At Old Dominion, he has overseen such areas as budgeting, campus security and information technology. In fact, the University's IT hub was renamed the David F. Harnage Computer and Data Center in 2009 to acknowledge his impact.

Dave has had two tours of duty at Old Dominion. He joined the University in 1985 and left in 2000 for other opportunities in business and higher education. Luckily for us, he agreed to return in 2011 as the University's chief operating officer. "ODU is the only university in the country I would have considered," he has said.

Dave will retire at the end of the month. His strong work will be continued by Gregory DuBois, who will join us next month as vice president for administration and finance. Greg brings more than 30 years of finance experience with the University of Florida.

You can walk through our campus to appreciate Dave Harnage's vision and creativity. Those who attended his annual get-togethers for staff members at the Ted learned something else about him: his devotion to Old Dominion's staff and students, as well as the University's mission.

At his last such meeting, in May, Dave told them that of the five universities with which he has been associated, "you are absolutely the best team of people I've ever worked with. I'm often amazed at how much you get done."

The students, he reminded them, are depending on all of us. "There are young people out there looking for the opportunity to become the leaders of tomorrow," he said. "It's a noble cause that we pursue."