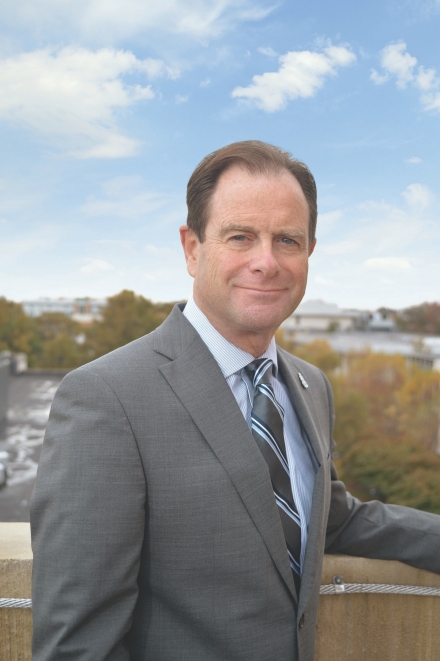 One of the encouraging developments of 2017 is the excitement surrounding a new movie that has nothing to do with extraterrestrials or terrorists. "Hidden Figures" chronicles the triumph of three female African-American mathematicians, who overcame bigotry and helped propel NASA's space program while they were working not far from here, at Langley Research Center.

In fact, the speaker at our annual Martin Luther King Jr. observance last week was Margot Lee Shetterly, who wrote the book on which the movie is based.

Old Dominion University recognizes that the issues raised by the film go beyond NASA and the field of mathematics. We already award the second largest percentage of degrees in STEM-H (science, technology, engineering, math and health care) fields among the state's universities. But we've intensified our efforts to inspire more women and minorities to enter those areas. Our society needs the best and brightest - every one of them - to tackle the challenges that lie ahead.

Like so many of our initiatives in diversity and inclusion, these programs have yielded success, but our work is far from done. That's why Debra Major, an eminent scholar in psychology and Provost's Fellow for Faculty Diversity and Inclusion, convened a faculty working group last year on broadening participation in STEM-H areas. The goals of the group, supported by our Office of Research, include increasing collaboration throughout the university, encouraging innovative programs and winning grants to further propel our progress.

Our work in widening the STEM-H pool stretches across departments and colleges. Let me give you just a few examples:

In the College of Sciences, physics professor Gail Dodge last year organized a Conference for Undergraduate Women in Physics, which attracted 150 female students from across the mid-Atlantic region. During the year, Professor Dodge and Leposava Vuskovic, an eminent professor of physics, host four dinners for women in ODU's physics department, from undergraduates to faculty members. The idea is to share experiences and advice and build mentoring relationships. And that dovetails with Professor Major's research, which shows that connections with peers, faculty members and other role models greatly increase the odds that students will stay in STEM-H fields.

The physics department's efforts have paid off: Nearly one-third of ODU's graduate students in physics are women, compared with less than 20 percent nationwide.

For more than 15 years, the Batten College of Engineering and Technology has held a four-week Early Engineering Advantage Program for incoming female students who plan to major in engineering. The program, run by Beverly Forbes, the college's associate director for experiential education programs, includes workshops and visits to public and private engineering facilities. Some of those students have ended up working at companies including Northrop Grumman, Newport News Shipbuilding and Norfolk Southern.

The college continues to expand outreach - including summer camps, workshops and school visits - to introduce local students at all grade levels to engineering and technology and to help them succeed academically. For example, our student chapter of the Institute of Electrical and Electronics Engineers provides tutoring and mentoring to students at the Southside STEM Academy at Campostella, an elementary school in Norfolk. In conjunction with our spring open house, we have Women in Engineering Day, inviting a prominent female in STEM-H to address participants during the design competition event.

And in the Darden College of Education, Tony Perez, an assistant professor of educational foundations and leadership, is studying methods to increase undergraduate success in STEM-H programs. One of his suggestions is to go beyond the right-or-wrong approach in grading exams and homework and, instead, to turn it into a "learning experience" that offers students more feedback about their strengths, the areas where they've fallen short and possible strategies for improvement.

He also is looking into the value of showing struggling students videos of successful upperclassmen, primarily minorities and women, who talk about how they overcame obstacles in their early college years.

Our goal is to increase participation and success for all STEM-H students. The key, Professor Dodge emphasizes, is to provide a welcoming atmosphere for everyone. And, as she says, it starts with "one teacher in one classroom."

Our Martin Luther King Jr. observance last week was not our first or last recognition of "Hidden Figures."

In 2010, Old Dominion awarded an honorary doctorate to Katherine Johnson, one of the three women portrayed in the movie.

And in two weeks, on the morning of Jan. 25, Stephanie Adams, the new dean of the Batten College of Engineering and Technology, has arranged a private screening of the film at Regal MacArthur Center Stadium for girls from Norfolk's high schools, who also will get to speak with female and minority STEM-H students from ODU, as well as our faculty members.

One day, our country will no longer have hidden figures. But that will happen only if Old Dominion and other stakeholders, from elementary and secondary education to business and industry, commit themselves to clearing the obstacles and equipping students for success.